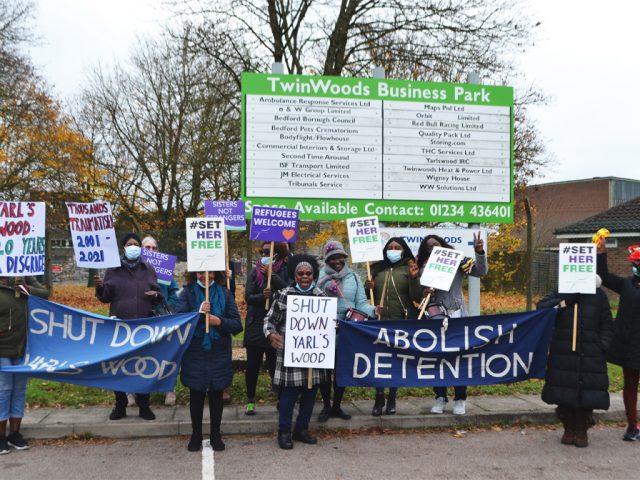 Former detainees of Yarl’s Wood have returned to the immigration removal centre (IRC) in Thurleigh to protest its continued operation, 20 years to the day that it first became operational.

Protesters were joined yesterday (Friday) by a 65-year old woman who was detained in Yarl’s Wood for more than three months after fleeing the civil war in Cote d’Ivoire and a woman in her 40s who tried to commit suicide on two separate occasions while being detained for eight months.

15 protesters, all but three of whom had previously been detained, carried banners and signs that read ’Sisters Not Strangers’, ‘Refugees Welcome’ and ‘#SetHerFree’.

They walked from outside the entrance to the Twinwoods Business Park, where the Yarl’s Wood Immigration Removal Centre is advertised on a sign alongside Bodyflight and Red Bull Racing, to a field adjacent to Yarl’s Wood via a public footpath.

Setting down three commemorative headstones and flowers for the three people who have died within the IRC over its two-decade existence, the protesters chanted and shouted “shut it down, shut down Yarl’s Wood”, “Open the gates, let them out” and “We fight til Yarl’s Wood Falls”.

Hoping that those currently detained within the facility could hear their calls, the protesters also shouted, “We love you, we are thinking of you.”

At one point, somebody could be seen waving from a first-floor window within the centre, though it is not known if they were a detainee, as it is believed the current detainees are being held on the ground floor.

At another point, what sounded like a shout of appreciation could clearly be heard coming from the direction of the centre.

Speaking to the Bedford Independent, Agnes Tanoh, 65, who was detained within Yarl’s Wood for more than three months in 2012, after fleeing the civil war in her home country of Cote d’Ivoire, was visibly upset and close to tears as she explained how it felt to see Yarl’s Wood again for the first time since she was released.

“I wish people who are in charge, could one day come here, and go through the corridor. For me it is like a tunnel, and when you are there, you don’t know if you will be released, so you have this stress every day.”

“I always [wonder] why they call it a detention centre,” said Tanoh, who was freed from wrongful imprisonment in Cote d’Ivoire by the United Nations, walked to Ghana and then travelled to the UK to seek sanctuary.

Looking out at the field which borders Yarl’s Wood, with her back to the facility she was detained in, Tanoh added, “how beautiful it is.”

She added that during her detainment, she had no idea of the peaceful surrounds of the centre as she couldn’t see them from where she was being held.

A North African woman in her 40s who was detained in Yarl’s Wood for more than eight months after being the victim of sex trafficking in her home country, told the Bedford Independent that she had been treated as “less than a human” during her detainment.

The woman, who didn’t want to give her name, had her detainment ceased after a judge ordered her release. Her Rule 35 report had confirmed that her scars and injuries were consistent with the abuse she had claimed to have suffered in her home country.

She described how she had twice attempted suicide while detained within Yarl’s Wood, and at one point had started to hear voices in her head due to the level of distress she suffered.

“I was suicidal, I tried to commit suicide twice while I was there because life was not worth living,” she said, explaining that being locked up at night triggered her to revisit the trauma that she had suffered in her home country.

Since she was released from Yarl’s Wood, the woman has returned to London, where she was living prior to her detainment. She is hopeful that she will be able to study and then pursue a career in social work, partly due to her experience in Yarl’s Wood.

She said that returning to Yarl’s Wood for the protest had finally given her some sense of closure over her detainment.

Asked for her views on Bedfordshire and the people that live in it, she said “Bedford is alright, I don’t have a problem with Bedford, but this thing here [Yarl’s Wood] is not worth it.”

She added that Bedfordians should “enlighten themselves and educate themselves” about the detention centre and those held within it.

In addition to today’s protest, Tanoh is also leading a Women for Refugee Women campaign against the planned opening of a new detention facility in Hassockfield, County Durham.

A petition on Change.Org launched by her had been signed by 15,928 people at the time this article was written.

Mohammad Yasin, Labour MP for Bedford and Kempston, told the Bedford Independent in a statement: “I’ve been calling for Yarl’s Wood to be closed down since becoming an MP.

“It’s outrageous that persecuted women, many of them survivors of rape, torture and trafficking, that have fled their countries to find safety, and are locked in poor conditions for months on end, while their asylum claims are processed, adding to their already considerable distress.”

Bedford Mayor Dave Hodgson (Liberal Democrat), and Richard Fuller, Conservative MP for North East Bedfordshire, have also been approached for comment but did not reply by the time we went to publication.

When approached for comment on the protest, Serco, the contractor which currently operates Yarl’s Wood on behalf of the Home Office, directed the Bedford Independent to contact the Home Office.

A spokesperson for the Home Office, told us, “immigration detention is a necessary but limited part of our immigration system, encouraging compliance with the law, as 95% of those liable to removal are managed in the community.”

While detainees at Yarl’s Wood have historically been predominantly women, the planned changes to its operation will see it become a predominantly male centre.

The three headstones and the flowers laid during the protest were to commemorate the three detainees who have died during their detention in Yarl’s Wood.

Manuel Bravo committed suicide by hanging in a stairwell at Yarl’s Wood Detention Centre on 15 September 2005 in the hope that his death would mean that his son could remain in the UK rather than be sent back to Angola.

Christine Case, who was born in Jamaica, died of a heart attack on 30 March 2014.

Pinakin Patel also died of a heart attack on 20 April 2015. Following his death, a number of detainees went on hunger strike in an attempt to get his wife released from the centre following her bereavement, she was later released.

They had been detained at Yarl’s Wood because officials believed they intended to stay beyond the 10 day period their holiday visa allowed.

To find out more about how you can support immigrants detained at Yarl’s Wood visit Yarl’s Wood Befrienders here.

If you have been affected by this article, or if you think you need to talk to someone about any of the issues raised, you can access support from the Samaritans here.