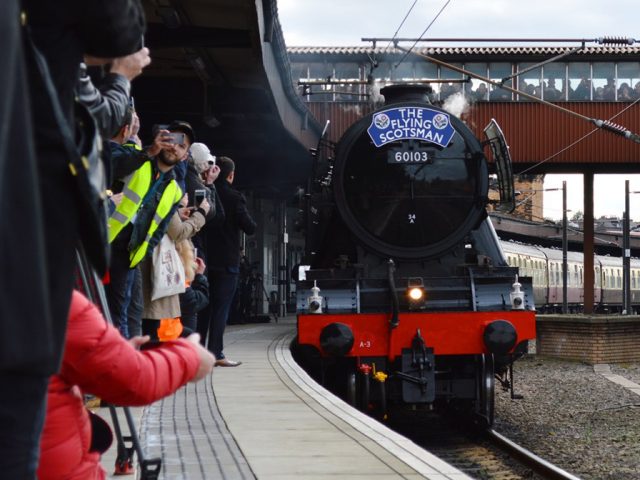 The Flying Scotsman will be thundering down the Midland Mainline this weekend, giving fans of the iconic steam engine a chance to see it in action.

But, Network Rail have asked anyone who is planning to get a glimpse of the iconic engine to stay safe and keep off the tracks, after dangerous behaviour during tours of Flying Scotsman elsewhere in the country.

Crowds of people, including young children, were seen in photographs illegally trespassing on the tracks and even standing in the path of oncoming trains.

Trespass on the railway is a criminal offence carrying a maximum £1000 fine. If you also obstruct a you could be sent to prison for up to two years.

Vicki Beadle, operations risk advisor, for Network Rail, said: “We want people to have a fantastic time this weekend, but we can’t stress enough how important it is to keep safe at the same time.

“Trespassing on or near the tracks is incredibly dangerous, as well as being illegal and we work closely with British Transport Police to tackle this. There is never an excuse to trespass on the railway and this type of behaviour can have devastating life-changing and even fatal consequences.”

Chief inspector Gareth Davies, from British Transport Police, said: “Seeing the Flying Scotsman is an exciting event for many people and we want everyone to be able to have a great day out.

“Our priority is the safety of everyone viewing and travelling on the train, and our officers will be along the route and at stations to ensure everyone can enjoy the event without putting themselves or others in danger.

“Please remember to use safe vantage points to view and take pictures of the train, stay clear of the line, and do not risk serious injury or death by trespassing on the tracks.

“It is important to remember that the railway is an extremely hazardous environment and those caught trespassing or obstructing trains can expect to be prosecuted.”

The Flying Scotsman will travel north along the Midland Main Line before heading into Yorkshire.

It will pass through Bedford on the morning of the 29 June at around 8:45 and return along the same route at 21:10.