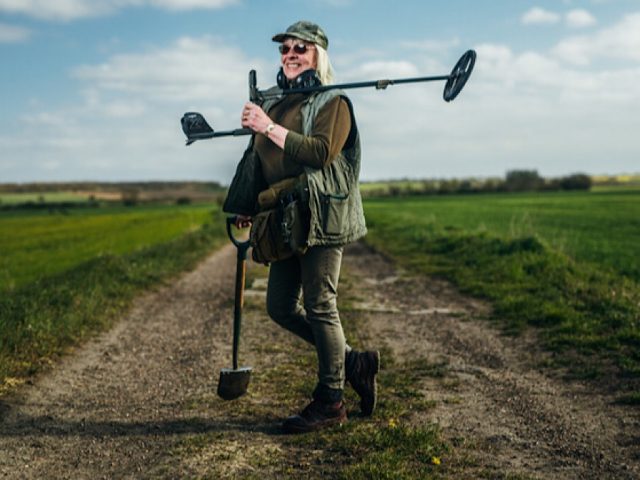 The fourth in our Faces of Bedford series features Nettie, a metal detector, who has struck gold every year for the last 12 years.

Over to Nettie, in her own words…

I started detecting when I saw someone in the fields near my village doing it. I said to him what everyone says to me now – what are you doing? He was so enthusiastic, and we were chatting for ages. He let me have a go.

At the time I worked in the police control room which was quite stressful, and the long walks were a chance for me to get away and clear my head for a few hours. I went home and bought the same machine!

I knew most of the local farmers in the village so could do some exploring. That was 12 years ago. My gut instinct and ability to ‘read the land’ has developed.

I knew a bit about geology and the lie of the land. I’m also into history so researching about Romans, Vikings and what they did had also helped a lot.

For example, many people would assume Roman Villas would be up on hilltops for the views, but actually, they’d be on the side of the hill – I can definitely look at the land and it talks to me and I’ll be like – ok I’m heading over there.

I’ve been lucky and found gold every year since I started which is rare. Some have been detecting 40 years and have found none; I’m very lucky.

If you have good land, you’re in. Bedford is very Roman and has lots of history and the Vikings that came down the Ouse on their way inland.

Faces of Bedford: Nettie
1 of 5

I don’t do much map reading because everyone does that and all the key settlements have been detected already.

When I started, I was one of very few, but now there’s large groups and clubs that meet regularly running digs and it’s become more popular.

I have joined a few groups too because the banter is great! You’re all the same ilk – all there because you love doing it.

I can leave at 6am and won’t be back until 8pm at night. I get completely absorbed by it. I will be out there all weather, it doesn’t matter to me.

I actually love detecting in the snow because you can see where you’ve already been! I’ve been here my whole life and Bedford has all I need. In life – as well as detecting – seek and you shall find!

Faces of Bedford was set up during lockdown by commercial and wedding photographer, Dan Davies, to showcase the extraordinary people that make Bedford brilliant.