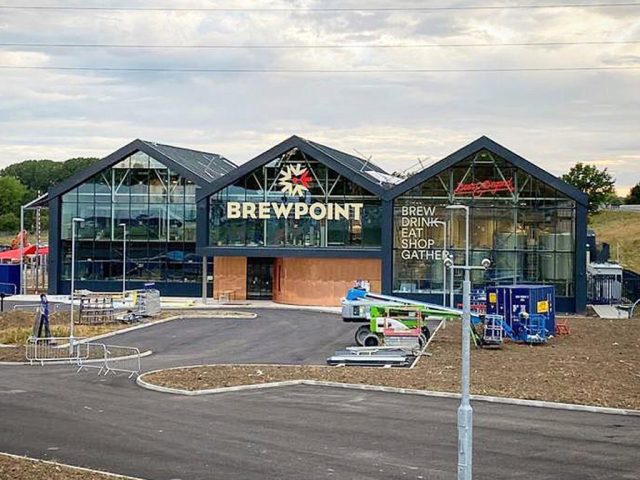 Bedford’s oldest brewer, Wells & Co, will be back brewing in the town by September, with fresh beers being poured in their pubs shortly after.

Wells & Co, formerly known as Charles Wells, announced plans in early 2018 to build a 30,000 hectolitre brewery and visitor centre at the Fairhill site.

This was after selling their brewery and all but two beer brands to Marston’s in May 2017 for £55m.

Their new Brewpoint Brewery, located on the A6 roundabout near Clapham, was due to open in summer 2019.

But a judicial review last year meant work didn’t begin in earnest until late spring 2019. Further delays have also been caused by the coronavirus lockdown.

Now, Peter says things are on track to see brewing begin in September and the first beers reaching pubs by October.

“Amazingly, our construction partners have managed to keep going through the lockdown in a safe way.

“If they had been able to, they would have finished just two-weeks behind their initial schedule.”

Unfortunately while the brewery build may be ‘on-time’ the knock-on effects of coronavirus has seen significant delays in power and other utilities being connected to the site.

Not just a brewery

Brewpoint won’t be just about brewing, the new site will also include a visitor centre, bar, restaurant, function rooms and tour.

While a retail shop will open on the site in October, the rest will follow later in the year.

“We really don’t want to open up the full brewery until we know we can do it absolutely properly. So, currently think it’s probably going to be early spring [2021],” said Peter.

Reacting to the news, North Beds CAMRA Chairman, Dan Veal, said the opening will be a big boost to Bedford’s economy.

“It’s really positive news. With new jobs and better choice of beer in Bedford’s pubs, it’ll give the industry a boost when it needs it most.

“I’m very much looking forward to Wells brewing again. It should allow for more exciting beers and maybe ventures into small-batch craft brewing. It’ll bring something back to Bedford.”

Celebrate Jamaican Independence Day in Bedford with a host of familiar...

Underfunding of Bedfordshire Police to be addressed by Home Office