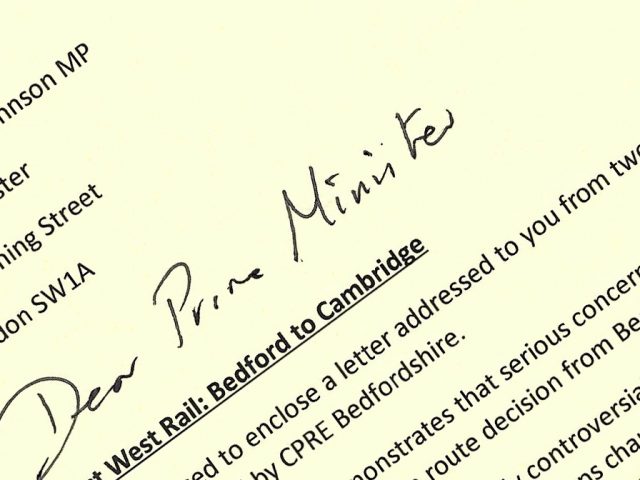 Richard Fuller, MP for North East Bedfordshire, has forwarded a letter from local campaign group Bedford for a Re-Consultation (BFARe) and 12 Bedfordshire Parish Councils to the Prime Minister.

In his cover note to the PM, the Conservative MP says the letter, dated 2 February 2022 and endorsed by the Campaign to Protect Rural England (CPRE), demonstrates the “serious concerns” surrounding the 2019 consultation by East-West Rail to decide the route for a new rail line.

Read: Residents left ‘reeling’ ahead of next stage of East West rail consultation

Mr Fuller highlights the controversy surrounding the consultation, which many Bedfordians believe did not give them a proper chance to respond and that parish councils were not properly informed.

Mr Fuller explains to the PM that “all options offered in the 2019 consultation traverse my constituency, so I do not make any representation for, or against, any route.”

However, he does say that he is “concerned that this process has been deeply flawed and may result in a brutal scarring of the Bedfordshire countryside and considerable
resentment from local people.”

Mr Fuller closes his cover letter, saying, “I trust and hope you [the Prime Minister] will review the letter and give their representations your considered judgement.”

BFARe has shared their letter to the Prime Minister with the Bedford Independent and we are happy to print it unedited for our readers.

RE: East West Rail (EWR) – Route Through Bedford and on to Cambridge

We write as a group of alarmed Parish Councils, Borough Councillors, Environmental groups and residents of North Bedfordshire. Together we form BFARe (Bedford for a Re-Consultation) and met with the former Minister for Transport in March 2021 to highlight our grave concerns regarding the Nationally Significant Infrastructure Project, East West Rail.

We would like to request that you intervene on our behalf and either call for a re-consultation on the route selection between Bedford and Cambridge, or a review this project for cancellation. We ask this for the following reasons: –

Despite our meeting with Chris Heaton-Harris and the subsequent consultation process in summer 2021, fundamental questions remain unanswered regarding the project, its environmental impact, cost inconsistencies and the lack of transparency. Our concerns can be summarised as:-

The Parish Councils and other BFARe members would appreciate the opportunity to discuss these concerns with you directly. We have put forward a credible, less damaging, less costly and more environmentally sensitive alternative that meets all stakeholders’ objectives, but fear EWRCo are pressing on regardless.

We are keen to work with EWR and DfT to ensure this strategic investment achieves the goals of EWRCo and Bedford Borough Council in a more sustainable manner that improves the lives of residents without permanently destroying North Bedfordshire countryside.

However, the councillors that the Bedford Independent has spoken to have expressed their frustration that EWR has not included residents in these meetings.