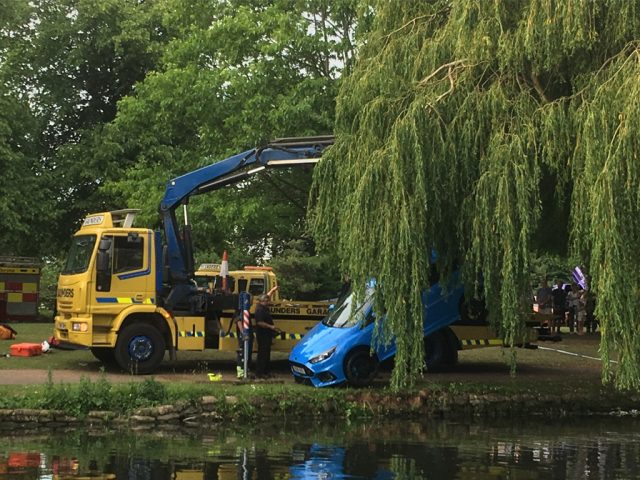 It’s likely to have been the best Bedford Kite Festival yet, with much more on offer than previous years and thousands descending on Russell Park and the Embankment to enjoy the sunshine and attractions.

It was also the first Bedford Festival of Motoring, Canoe Trail were giving people a chance to try canoeing and kayaking and there’s a dance tent live until 11pm tonight.

But it was a slip of a handbrake that appears to have caused the highlight for many.

As many cars and people started to head home, one Ford Focus RS owner moved his car to allow some flags anchored under his tyres to be removed.

He apparently said that he leant across to let the handbrake off and the slope was more than he expected.

Bedford Festival of Motoring - car in the river
1 of 5
Naturally gravity kicked in and the car sped down the bank and into the river opposite the Longholme Boat House.

It took a couple of hours for recovery vehicles to lift the customised car, said to be valued at £25,000, but a patient and eager crowd stayed on to watch it rise from the shallow River Great Ouse.

In a classic case of schadenfreude, one bystander, Tom, saw the unfortunate incident unfold: “I couldn’t believe what was happening. It’s the best entertainment we’ve ever had, and for free.”

No one was said to have been hurt in the incident, although a couple of people on a park bench did have to get out of the way quite quickly.

The car owner also ended up in the river, but was helped out by some friendly kayakers.

The Kite Festival isn’t over yet. The dance music tent will be entertaining people until 11pm and then it all starts again on Sunday at 11am with kite displays and activities in Russell Park and more cars along the Embankment.

Ahead of that, Run Bedford’s 10k race starts at 10am from Russell Park.