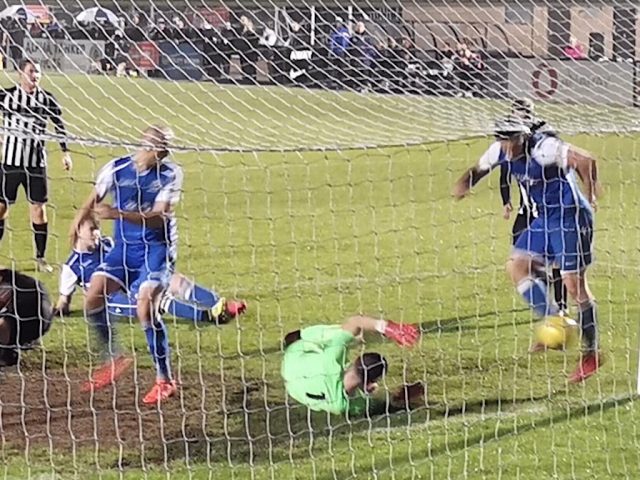 Corby Town 5 – 3 Bedford Town
Bedford went all out to win their playoff semi-final match at Corby Town on Wednesday evening, but it was the hosts that came out on top in an eight goal thriller.
Bedford dominated the game for the first ten minutes, Leon Lobjoit and Dan Walker both having shots saved by the Corby keeper.
Corby then came back and scored first. Stephen Diggin fired in from close range after a shot was saved by Ashlee Jones, but it was only parried into the path of the striker, who made no mistake with his second chance (1-0 17’).
Five minutes later the lead doubled. A free kick was played in and headed into the path of Jordon Crawford who gives Corby the two-goal lead (2-0 23’).
Ten minutes later Bedford came close when a cross from the right by Dan Walker was glanced on by Jack Vasey and although he beat Dan George, the woodwork came to Corby’s rescue. Leon Lobjoit took up the slack, and was challenged in the area, but referee waved play on.
Corby’s third came when Jordan Francis flashed a shot across goal, and Stephen Diggin touched it onto the post, and Elliott Sandy got the rebound (3-0 39’).
Bedford had their chances in the first half but the Corby keeper had a good day at the office and kept everything out.
In the second half things got worse for the Eagles when a penalty was awarded to Corby after Jordan Crawford went down in a clash with Bedford keeper Ashlee Jones. Both players received treatment and the referee pointed to the spot (4-0 50’).
Bedford made their first change with Paul Benson coming on for Vasey and soon after the visitors got their first goal as at the far post Callum Donnelly got a clean header in to loop over Dan George (4-1 61’).
James Hall came on for Kirkpatrick and soon after Bedford got a penalty as Lobjoit was downed in the area. Dan Walker stepped up but saw his spot kick saved by Dan George.
Bedford were down to ten men after Brett Longdon was shown red after a tackle on the wing but soon after they found the net for a second time with just over 10 mins remaining. James Hall put the ball away after a cross from the right was played behind the Corby defence (4-2 79’)
Corby were not finished yet though they got their fifth after a brief spell of hope Bedford had with their second goal. The ball was crossed in from the left and Joel Carta was at the far post, on his own, to score (5-2 82’).
The eighth and final goal of the match came from a free kick, when Joe Steele (pictured above) bundled the ball over the line (5-3 88’).
Bedford can look back on a good season where they achieved their aim of a playoff place and had a good cup run in the FA Trophy, but it’s Corby that will go forward to the playoff final at Bromsgrove Sporting on Bank Holiday Monday.
The Eagles season comes to an end tonight (Friday), when the annual presentation evening takes place in Maxey’s at the Bright Management Eyrie Stadium at 8pm. Entry is free and all are welcome from 7pm.
Bedford Town:
1 Ashlee Jones
2 Lucas Kirkpatrick (James Hall 63′)
3 Ben Ford
4 Brett Longden
5 Mason Watkins-Clark
6 Joe Steele ⚽️
7 Ebby Nelson-Addy
8 Callum Donnelly ⚽️
9 Jack Vasey (Paul Benson 58′)
10 Leon Lobjoit
11 Dan Walker
Subs:
12 James Peters
14 James Hall ⚽️
15 Paul Benson
16 Connor Furlong
13 Nathan Abbey
Words & photos: Michael Jarman-Webb