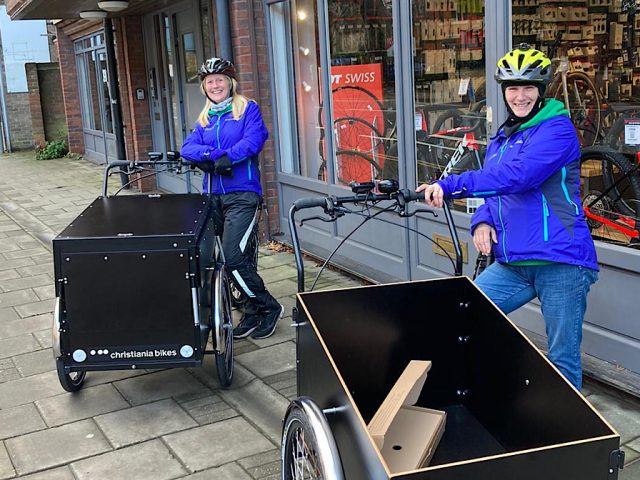 The addition of six eCargo bikes to the Council’s vehicle fleet has been welcomed by councillors and businesses keen to see greener and more sustainable transport solutions in the Borough.

The bikes, bought following a successful funding bid to the Department for Transport, are two or three wheeled electric-powered vehicles that can be used to transport bulky items.

Bedford was among 18 local authorities to successfully bid for the funding.

Four of the bikes will become part of the Sustainable Transport team’s vehicle fleet to support their work with schools and at events, within the Street Cleansing Team, and at Harrold-Odell Country Park for park maintenance.

One each have also been loaned to the University of Bedfordshire and Flamme Rouge Cycles.

In leading by example, the Council hopes that other local organisations and businesses will be encouraged to explore low carbon transport.

Cllr Lucy Bywater, Green Party councillor for Castle Ward, said: “I was really pleased to see the successful grant bid for these bikes last year and I look forward to seeing the council make as much use as they can to reduce vehicle movements where possible.”

Cllr Bywater highlighted the potential for local businesses to use the bikes to make deliveries, reducing air pollution and traffic congestion.

“It could even be a selling point to attract new customers,” she said.

“What I’d really like to see is an eCargo bike hub in the area for the last few miles of deliveries from out of town. That could really start to reduce the number of delivery vans on residential streets.”

There will be a revolution in ‘last mile delivery’ over the next few years, according to a report by McKinsey.

Increasingly, deliveries will be made by automated guided vehicles (AGVs) fitted with parcel lockers, drone deliveries and bike couriers. They predict that autonomous vehicles will account for 80% of all parcels by the middle of the decade, with bike couriers becoming more visible in urban areas.

Jamie Quiggan of Flamme Rouge explained how they plan to make use of their eCargo bike.

“Our plan to use the bike for ‘final mile’ deliveries in the local area, and also for on-site fleet servicing as we have contracts with the Harpur Trust and other local businesses to look after their fleet of bikes.

“The opportunity for this type of transport is to provide clean and sustainable vehicles that can potentially take fossil fuelled vehicles off the road.

“It also extends the range and speeds deliveries vs the use of normal pedal cycles. So we see that they would be great for takeaway deliveries, especially now in lockdown.”

Rosanna Heasman, owner of Bedford’s refill shop, The Store, says the purchase of the bikes is a positive step towards more sustainable transport and something independent businesses could embrace.

“It’s a great concept that I’m excited to see being executed,” she said.

“It may take some time to get used to greener ways of deliveries but the sooner it can be adopted into our towns the easier it will become and the better we’ll all be for it.”

“Last mile delivery is an important area for consideration in our journey to reduce transport emissions to net zero by 2050.”

Mayor Dave Hodgson said the bikes will help the Borough’s teams to operate in a more eco-friendly way and hoped that they will encourage others to do the same.

The eCargo Bike Grant Fund scheme is funded by the Department for Transport and delivered by Energy Saving Trust. The bikes were purchased following the award of £27,838 from Department of Transport to Bedford Borough Council.