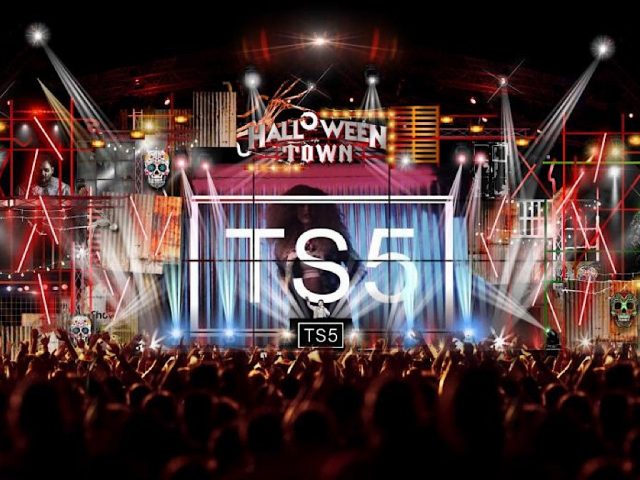 Get ready for the scare of your life next week as Halloween Town haunts Bedford with a monster musical line-up of local talent and big-name acts.

Aside from music world monsters Craig David and The Levellers, festival-goers can expect immersive thrills and chills inside a huge big top.

Professional make-up artists will turn revellers ‘into creatures of the night, making them part of the Halloween Town fabric.

But, best of all, the event organised by Bedford promoters LPH concerts, champions local talent.

Sean and Wreckdown cut their teeth on the Bedford music scene and are beyond excited to be playing such a high-profile gig in their hometown.

Sean, who lives in Wootton said: “I’m absolutely buzzing. I can’t wait for it. To play an event with such a huge line-up in my home town, you can’t really ask for much more.

“Craig David, probably one of the most successful UK garage and Urban music artists ever to come out of this country and he’s coming to Bedford.

“And I’m getting to play on the same stage on the same night. It’s the stuff that dreams are made of.”

Wreckdown said being on the same line-up as Craig David and Majestic was “quite a big deal”. He’s looking forward to seeing DJ EZ, ‘the DJ’s DJ’ play on Saturday night.

Sean described Halloween Town as “the perfect gig”. He said, “it’s exciting beyond belief but also pride” that lots of people he knows will be there. He said: “I’m just very grateful to have this opportunity in my hometown. I’ve lived for this night.”

He’s been preparing different pools of records. Audiences can expect garage anthems, singalongs, and a party vibe from his set.

“Anybody that knows me knows I’m UK “garage through and through. It runs through my veins. I love the genre of music and it’s “loved me over the years.

“So, I am gonna play a set of UK garage anthems, mixed in my own unique way and just create that party atmosphere that garage brings,” he said.

Wreckdown intends to play uplifting music with a big energy.

For both artists it’s the size, scale and high-profile nature of this festival in their hometown that makes it so special. Sean said: “DJ EZ, probably the biggest inspiration of my whole life in music is coming to Bedford.

“Craig David, such a huge artist, coming to Bedford. And then little old me being part of it.”

Sean was introduced to garage music in his mid-teens. He recalls listening to Bedford’s pirate radio station Risk FM at school, ‘it was a really big thing, you were pretty cool if you listened to Risk’.

It wasn’t long before he was MC’ing for the station. He said: ‘In terms of pirate (radios) outside of London, I’d argue that was probably the biggest.

“I managed to meet some fantastic, talented people through that platform which has obviously led onto bigger things.”

He was influenced by Bedford garage artists KC and Daz Norman. Prominent figures on the UK garage scene, they played major nights like Garage Nation and Sidewinder.

They also had their own promotion at Enigma called ‘Catch the feeling’. The top names they brought to this night were a major influence on Sean.

Another inspiration was Bedford’s late MC Blakey who passed away recently. Sean said: “He’s a Bedford boy and did massive things on the garage scene as an MC.

“We’ve had a lot of talented people come from Bedford and I’ve been inspired by everybody I’ve met along the way.

“Everybody’s got something to offer, and you take pieces from people.

Sean particularly credits Greg Costa of LPH Concerts for the support he’s given his career over the years, putting him on platforms, ’that I could only dream of’. Sean hopes to ‘do him proud at the Halloween Town Festival.’

Wreckdown started DJ’ing when he was 12. He took part in an under 18’s DJ competition at Oceana Milton Keynes. He said: “That was my foot in the door to the nightclub world and ever since then it’s sort of spiralled off of that.”

He was on LPH’s radar via Greg Costa who booked him for Bedford under 18’s nights.

Wreckdown went on to study music technology at Bedford college which he described as ‘insightful’.

Now 25, it’s been a fast track to success, playing Studio 338 and Ministry of Sound in London. He said it was exciting playing those venues as they are the ones he goes too. “To be able to play in them and get paid for it is pretty much the dream come true.”

He has weekly residencies in Coventry, Peterborough and Bedford’s Empire as well as a weekly radio show called ‘Reprezent’. He said: “it’s all just been a general steady path onwards and upwards really.

“When I started DJ’ing I just did it as a hobby and now it’s turned into a full-time career. So, yeah, it’s been pretty crazy.”

Wreckdown thinks Bedford’s “one of those places” where there’s naturally loads of local talent.

Sean credits the calibre of venues such as Esquires. He said: “In terms of the smaller more local music scene in Bedford, I think we’ve always had some really great venues.

“One that springs to mind is Esquires. Esquires have hosted so many different types of music events from jungle, to drum and bass, to garage, to rock music, reggae, you name it, that venue has held good events with big names.

“I think because we’re lucky to have a venue like that the town really buys into those events and everybody loves music in this town.”

He said Bedford has had a very strong club scene historically, with the likes of Enigma, Empire, Timeout and Hi-Fi.

However, he thinks the landscape of partying is changing and it’s moving more towards festivals and brunches’ He said: “That’s why we’re so lucky because the landscape is changing, Bedford is getting events like Halloween Town.”

Festival-goers can expect unique sets from both DJ’s. Neither artist pre-plans before the night, preferring to “do it on the fly”, as Wreckdown says. His exact words were, “expect the unexpected”. He said: “I look at the crowd before I go on and then Kind of judge it to see what they might like.

“And then I’ll play a few records, see how it goes down, but I always play it by ear really of what the crowd is saying.”

“It’s easy when it’s going well. You go to some parties or festivals or raves where no matter what you play, they’re just gonna party because that’s the vibe.

“But other times it’s not quite like that and you have to really work for your money.”

He believes one of the biggest skills a DJ can have is reading the crowd and said you have to be prepared with all the ammunition you could possibly need.

To hear Sean and Wreckdown talk about the alchemy of working a crowd is like hearing wizards talk about magic. Sean said: “At the end of a weekend, I’ll sit there and reflect on the sets I’ve played and think, ‘God, I hadn’t heard that record for years’.

“I was drawn to something I didn’t even remember was there but because the vibe was going a certain way I’m thinking ‘I better dig for something else’, you pull something out and you’re like, ‘oh my god, what a record!’

“And then I listen to it all week. So that really is the magic of working in different crowds.”