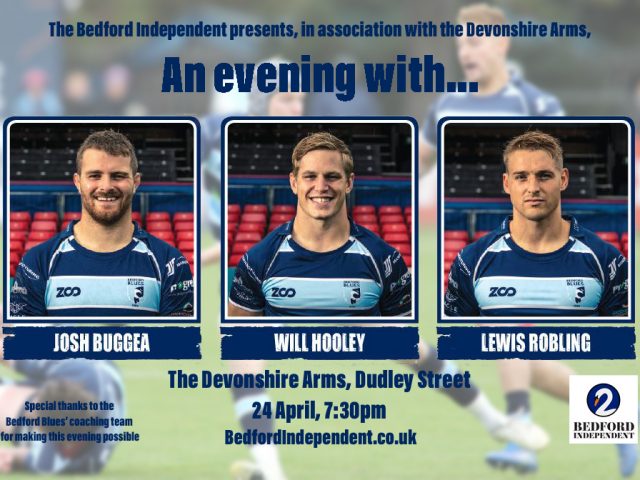 Popular Bedford pub the Devonshire Arms and the Bedford Independent are hosting an exclusive ‘Evening with…’ event that Bedford Blues fans won’t want to miss.

On 24 April, Blues’ fly half and sports reporter for the Bedford Independent, Will Hooley, will take to the ‘stage’ for an informal chat with two of his team mates, Lewis Robling and Josh Buggea.

The evening will be a chance for Bedford Blues fans to hear from all three about their rugby careers to date and what they’ll be up to during the season break.

They’ll also give an insight into their possible international commitments with the forthcoming Ruby World cup in Japan this autumn.

It all starts at 7:30pm and is due to finish at 9:30pm. Entry is free but we’ll also be collecting for Lulu’s appeal if you’d like to help this cause, donations will be gratefully received.

Will plays fly-half for Bedford Blues and the United States men’s national team. Hooley previously played for the Exeter Chiefs, Birmingham Moseley, and the Northampton Saints.

In 2013, he represented England in the World Rugby Under 20 Championship and was part of the winning team in the 2013 IRB Junior World Championship.

Last year, Hooley was picked as part of the United States national side, qualifying through his American grandmother.

He is also taking a Journalism and Sporting Writing Degree for professional sportsmen/women at the University of Staffordshire and writes regularly for the Bedford Independent.

Lewis usually plays fly half or centre and came to the Blues at the start of the 2018/19 season.

His career started as a 14 year old for Caerleon RFC before being picked up by the Newport Gwent Dragons academy, where he picked up young player of the year for the 2011/12 season

His career has since seen him playing for Newbridge RFC, Jersey Red, and Ealing Trailfinders before joining the Blues. Internationally he’s represented Wales in the u18s, 20s and IRB World Cup 2011.

Back rower, Josh Buggea signed for Bedford at the beginning of the 2014/15 season from Worcester Warriors.

He quickly established himself in the Blues team thanks to his drive and determination, as well as a superb skill set being recognised and appreciated by his team mates who voted him the Player’s Player of the Season for 2015/16.

During his time at Hartpury, Buggea played and won the AASE final against Oaklands college in 2011 before being called up to England under 18s in 2012.