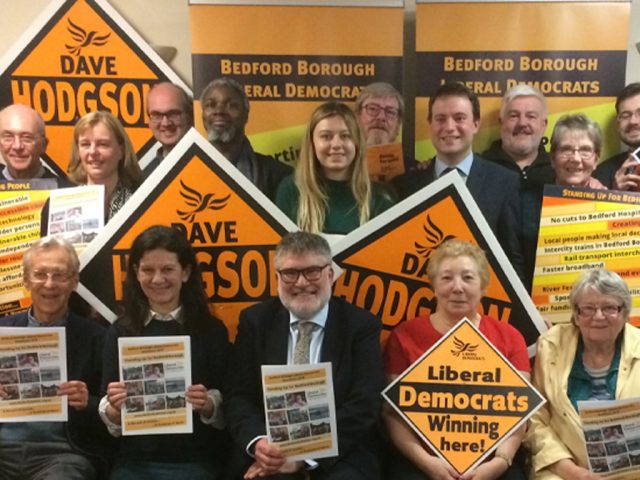 After a long and drawn-out electoral count, Liberal Democrat, Dave Hodgson was re-elected Mayor at just after 8pm on Friday 3 May, following the Bedford Borough Mayoral election the day before.

Watch the announcement and our exclusive interviews with
Mayor Dave Hodgson and Gianni Carofano.

2019 marks Dave’s tenth year in office, having first been elected Mayor of Bedford Borough in 2009 after a bi-election when the former mayor Frank Branston sadly passed away.

Frank Branston was a fundamental driver in the campaign to get an elected mayor for Bedford, after years or inaction from Bedford’s council that was plagued by stalemates due to lack of any overall control.

Bedford is one of just 16 authorities with a directly elected mayor and is in place because there is still no party with overall control of the Borough.

The count was heavily criticised for taking so long to declare.

Even before election Dave Hodgson told the Bedford Independent that he had asked council officers to investigate election count best practice from other areas.

Many candidates attending the count, as well as Bedford Independent readers watching online, expressed frustration and lack of understanding as to why the count was taking so long.

Editor’s note: As someone who has attended election counts for a variety of councils, over almost 20 years, I cannot understand why Bedford Borough’s count takes so long.

We will be asking Bedford Borough Council officers and the returning officer, Philip Simpkins, what they intend to do to correct this national embarrassment.

When asked what his first job would be on Tuesday, after the bank holiday, Dave said looking into “how this count has taken so long” before saying that he’ll be looking at the budget to ensure they can still provide front line services for the people of Bedford Borough.

Gianni Carofano, who many say fought a valiant and highly visible campaign, was clearly emotional about not winning the mayoral seat, but remained proud of his campaign.

Speaking to the Bedford Independent before any of the other gathered news organisations, he said: “I couldn’t be more proud of our team.

But he had this message for Dave, “Give him his credit, that’s four elections” he said “you don’t do that by accident.

“The only thing I’d like to say to Dave is, you saw what we did, you saw what people have told us they want for Bedford, please, please take heed from that and maybe something good will come out of that overall”.

Gianni also said that anger over Brexit is most likely to blame for the change in political landscape through the local elections, adding that “Theresa May and Jeremy Corbyn have a lot to answer for”.

Dave Hodgson agreed, adding that “the biggest punishment is the low turnout. People are just disillusioned and haven’t come out to vote and we’ve had a lot of spoilt papers.”

Turnout across the Borough was confirmed at 37% overall. This is down 10 points from 2011 which is the last comparable election.

Turnout in 2015 was at 66% but that was attached to a general election which means turnout is traditionally higher.

Some wards, however, recorded a turnout of 50%+.