A consultation has opened to see if the entire Castle Road area in Bedford should have a permanent 20mph speed limit, after councillors in Castle and Newnham Ward said residents are concerned about speeding vehicles.

Currently, almost all surrounding residential neighbourhoods have a 20mph limit but the Castle Road area, from Bedford’s High Street to Newnham Avenue, is seen as a “30mph island”.

“20mph limits also make for a nicer place to live, encouraging more pedestrians and cyclists. Other benefits of lower speed are reduced noise and vehicle emissions as it smooths traffic flow with less ‘accelerate, brake, accelerate’”.

The consultation will now ask residents if they believe a 20mph speed limit along Castle Road is needed, with a promise there will not be speed bumps or chicanes to enforce a lower limit.

“[it] will rely on obedience to the law and enforcement,” said Councillors Lucy Bywater and Ben Foley (Green, Castle) and Councillors Hilde Hendrickx and Jake Sampson (Lib Dem, Newnham). 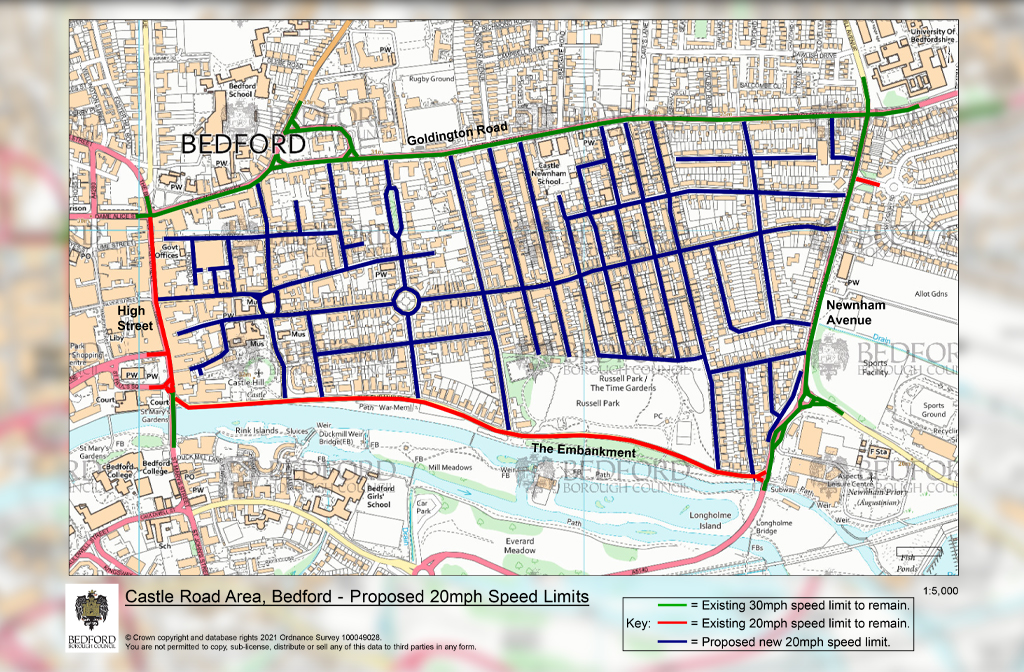 30mph limits on Goldington Road and Newnham Avenue would also remain in place, except for the short stretch of Newnham Avenue that joins Beresford Road from No. 6 to No. 28.

Ward funds from the councillors and Bedford Borough Council funds would pay for the scheme and, if successful, the speed limit could be in place by spring 2022.

“A 20mph speed limit will make our streets safer and more pleasant for all road users, but especially for people who walk or cycle,” said Cllr Hendrickx.

“We count on the support of all residents for this scheme and encourage everyone to ‘go slow’ when driving through our neighbourhood.”

You can respond to the consultation, which is open until the 26 November, in writing to Bedford Borough Council at highway.consultations@bedford.gov.uk.

More information about the proposed changes can also be found on the Bedford Borough Council website.