Up to 200 men could be housed in ‘prefab style accommodation’ at the former immigration removal centre as they await decisions on asylum claims.

The Bedford Labour MP Mohammad Yasin raised this issue with the Minister in Parliament, but said he was told that accommodation met ‘required standards’.

He said the minister disregarded the other issues he raised about a hostile environment for people who have already suffered trauma, and if they would be able to access appropriate healthcare and legal services.

“These camps are being set up at lightning speed in remote areas with zero consultation with stakeholders such as local authorities and the asylum sector,” said Mr Yasin.

“I am concerned about the conditions asylum seekers will be held in and their access to legal and health services in such a remote location.

“Though I’m told the residents are free to come and go as they please, this is far from the case.”

Richard Fuller, in whose North East Beds constituency the centre lies, said: “I have long opposed the dysfunctional asylum system that has led to a large detention estate including Yarl’s Wood.”

“While of course it is important that accommodation for asylum seekers is appropriate, my primary concerns lie with the safety of local residents given recent experience at other centres of asylum seeker going missing.

“During a meeting this week, I sought assurances from the Minister about security of the centre. I understand that while asylum seekers will be free to leave during the day, they will be under curfew at night.”

The Bedford Borough Labour Group said it was appalled to learn of prefab-style accommodation being constructed at Yarl’s Wood in preparation to house male asylum seekers there.

Labour Group Leader, Sue Oliver, said: “For many years we have had grave concerns about the conditions faced by the women housed at Yarl’s Wood, and have had to push for access to visit and scrutinise the health & social care they were receiving. Now we hear accommodation is being thrown up to house 200 men on the same remote site.”

Councillor Louise Jackson, Portfolio Holder for Public Health, said: “This is a particularly nasty proposal from the Home Office – rule changes snuck through without Parliamentary scrutiny and the creation of ‘asylum camps’ to house some extremely vulnerable people.

“Nobody is going to be truly free to leave a gated industrial estate in the middle of nowhere, and there’s little clarity available on what amenities will be provided. The Government need to urgently rethink this.”

Mayor Dave Hodgson confirmed he’s asked the Home Office to urgently provide details about the plans and the potential impact on the surrounding communities.

“As yet there has been very little communication with the Council or the local community,” he said.

“We need to know far more about what accommodation is being provided and the support that will be available to the people who may be housed there.

“Concerns have been raised before about issues at Yarl’s Wood. With the little information we have received, I am worried about the ongoing wellbeing of those housed there, many of whom will be vulnerable and having fled awful conditions and atrocities.

“The Home Office must ensure that any additional accommodation it is providing is civilised and respectful of the experiences of those it is housing.”

Bedford’s Stand Up to Racism group’s Rosie Newbigging, has organised a virtual rally on Zoom to unite groups and individuals opposed to the move. 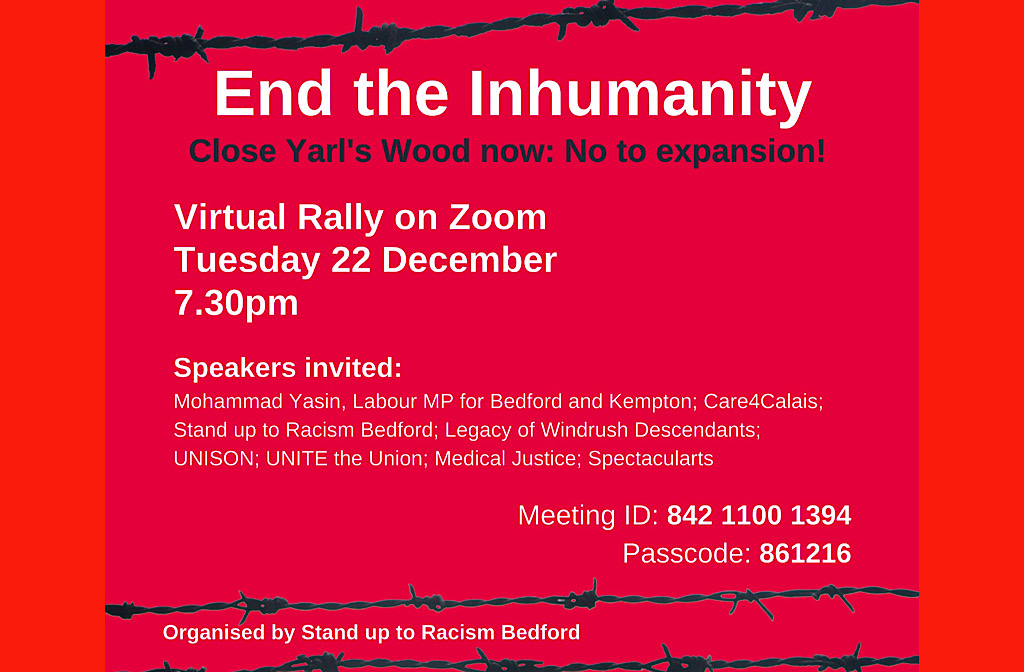 Rosie said: “The Home Office plan to place newly arrived people fleeing war, persecution, torture and abject poverty in portakabins on wasteland on the side of the main IRC, stuck in the middle of nowhere, demonstrates a total absence of compassion for some of our world’s most vulnerable people.

“As a Care for Calais volunteer and a founding member of Stand up to Racism Bedford, I have made my complete opposition to the Home Office plan very clear, as have some other local organisations.

“There are other more humane alternatives to this detention light plan including using hotel accommodation, hosting arrangements such as Refugees at Home or empty properties.

“We have a moral, political and historical obligation to support people seeking sanctuary. Yarl’s Wood is a stain on the humanity of this country and should be closed down, not expanded.”

It is believed the centre’s first intake would be arriving on 24 December.