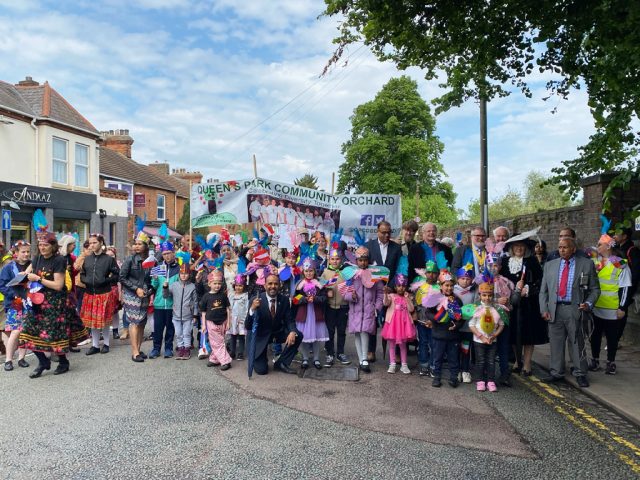 The annual Queen’s Park Multicultural parade took place on Saturday 4 June and brought a myriad of colours, costumes, laughter, and great camaraderie to the streets of Bedford.

The event, organised by Queen’s Park Community Organisation (QPCO), is an opportunity to showcase and celebrate the cultural diversity of Bedford.

While the parade may have been on hiatus during the last two years, QPCO has been working hard throughout the pandemic to help some of the most vulnerable people in Bedford, so the chance for the community to get finally together for the Queen’s Jubilee was certainly something to celebrate.

Utopia Mas UK led a series of art workshops with community groups and schools, in which costumes were made for the parade. These took place in All Saint’s Church Sunday School, ILearn women’s organisation in Bedford, Queen’s Park Academy, Priory Primary and King’s Oak Primary.

St Gregory and St Joseph schools had sessions of capoeira – a Brazilian martial art that combines dance, acrobatics and music – delivered by the Milton Keynes capoeira group and students performed on the day of the parade.

Luma Sounds gave a platform for local artists to perform at the event.

David from Utopia Mas UK said: “The idea was for each child to make a flower costume and at the end of the parade all the children come together to make a ‘Bouquet of Unity.’ The Bouquet will represent the cultural diversity of the area.”

This year the parade was led by Critical Mass, a campaign to promote safer cycling in Bedford. Adrian Spurrell, of the group, said: “It was a great privilege for Critical Mass to be asked by Queen’s Park Community Organisation to lead their parade from the centre of Bedford out to the Orchard.

“It’s a route many cyclists use, though maintaining walking pace did challenge our cycling skills – despite there being no cars.

“We believe that open and warm communities and cycling go hand in hand, so it was a real pleasure to be involved with QPCO. What a great event and community.”

Eric Masih, chair and Trustee of QPCO, said: “After a wet morning, many people from different sections of the communities came and attended the event.

“I wanted to add a big thank you to everyone who took part, all the volunteers and a special thank you to Sri Guru Ravidass Sabha Bedford for stepping at the last minute and helping us.”

The event was also an opportunity for QPCO to celebrate that they have been granted Charitable Incorporated Organisation status. Aysha Magre, Trustee of QPCO, said the team could not be happier as it means that we will be able to further help diverse communities and vulnerable people in Bedford.

Marie-Ange Comerford-Raillon, secretary of QPCO, said: “The day was also a celebration for all the volunteers who did an amazing job supporting vulnerable people during the pandemic.

“From the food parcel team collecting food from supermarkets, making and delivering food parcels, to our amazing phone team keeping in touch with isolated people, or the many other volunteers who carry on and do a fantastic job for us.

“They are the real stars of the show, and this event was also for them.”

The event was funded by the Bedfordshire & Luton Community Foundation via the Let’s Create Jubilee Fund and the Harpur trust.