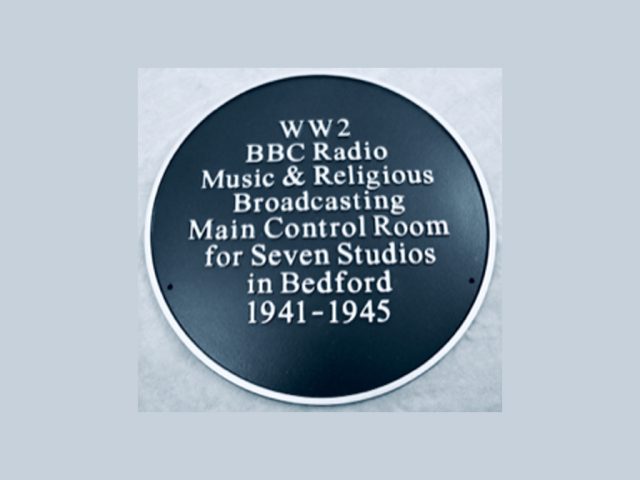 Bedford’s historical World War II connection to the British Broadcasting Corporation (BBC) is being honoured with the unveiling of a blue plaque on the side of Bunyan Meeting on Mill Street.

During the Second World War, many functions of the BBC moved out of London to locations in England.

The BBC’s Music and Religious Broadcasting Departments’ first home was in Bristol but in 1941, following several bombing raids, they were forced to move and Bedford was chosen as a relatively safe location.

Four hundred BBC staff were billeted in homes around the town, and Bunyan Meeting became a hub for the engineers, singers and members of the orchestras.

Seven studios were set up in the town and Bunyan Meeting Church became Studio 3. A smaller Studio 3A was used for talks and recitals.

The building hosted many famous people including Stuart Hibberd, Dr JW Welch, Rev. Eric Fenn, Sir Adrian Boult, Sidonie Goossens, Jessie Hinchcliffe and Clarence Raybould, together with the BBC Singers and the members of the orchestras.

Musical instruments were stored in the basement and a sound stage was built in the Large Hall with special lighting and covert quilting added to the walls to improve the acoustic.

Double sound-proofed doors were installed – which are still in place today – and the Hall was used by the BBC Symphony Orchestra, the Theatre Orchestra, and the BBC Singers for rehearsals and recordings.

The Main Control Room for all their operations was also installed at Bunyan Meeting in what is now the Harrowden Room.

Morning and evening services were broadcast from Studio 6 in the Trinity Chapel at St. Paul’s Church.

BBC Bedford became the largest wartime Region outside London and around 8,000 broadcasts were made during the years 1941 to 1945.

“A blue plaque is long overdue to mark the place where Bunyan Meeting played such an important part in Music and Religious Broadcasting during World War II,” said a spokesperson.

“We are absolutely delighted that Mrs Helen Nellis, HM Lord-Lieutenant of Bedfordshire, has kindly agreed to dedicate it for us on the morning of Saturday 3 September. Everyone is welcome to come along.”