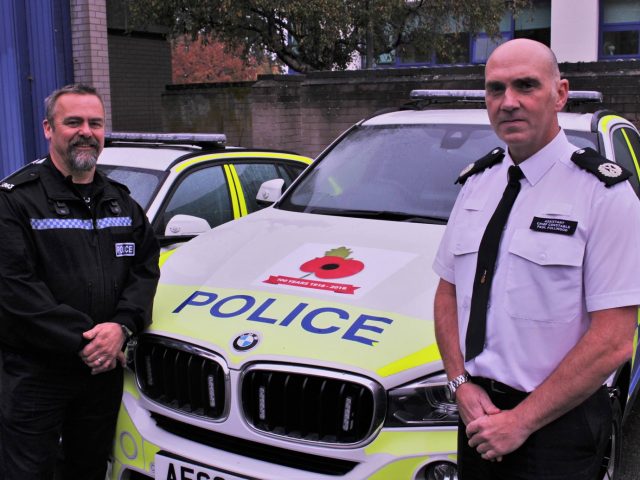 As we head into a week of Remembrance to mark 100 years since the end of the 1st World War, The Bedford Independent will be publishing a series of stories about the activities taking place across Bedford, to remember those members of their armed forces who have died in the line of duty.

Our first story looks at how our local police force is paying their own tribute.

The BCH Road Policing Unit will feature a poppy on all of their marked patrol vehicles in the build-up to the centennial Remembrance Sunday next month.

The idea was proposed by PC Mark Fairclough and Joint Protective Services ACC Paul Fullwood, both of whom served with HM forces before joining the police.

PC Fairclough said: “I was pleased to receive such tremendous support for this idea to remember our fallen service personnel and show our respects for the ultimate sacrifice they made.

“I did not want to force this idea on anyone, but have received positive feedback from every officer I have spoken to.”

The poppy will feature on the vehicles to commemorate the centenary of the end of World War One on 11 November, 1918.

ACC Fullwood, who leads the units under the BCH Joint Protective Services command, including the RPU, said: “I am proud to support the centennial Remembrance Day with this gesture.”