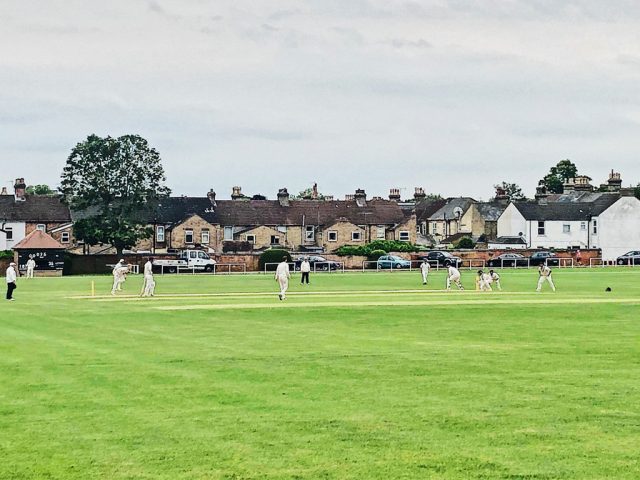 The slow left-armers took all 20 Hertfordshire wickets in a low-scoring contest at Bedford Modern School and clinched a 26 runs win, Bedfordshire’s first in three-day cricket since they defeated Suffolk at Ipswich School in August 2015.

Bedfordshire began the day needing to take three wickets to wrap up the win but they were made to wait by Ed Wharton whose 37 inched Hertfordshire closer to their victory target of 187.

Darlow took the wickets of Jigar Mehta and Ben Waring to complete his five wicket haul and Brett, the former Northamptonshire spinner, then completed his second five wicket haul of the match by snaring Wharton with a return catch.

Brett finished with match figures of 12 for 108.

Of the 40 wickets that fell, 37 were taken by spin bowlers with Wharton, who took the first two on the opening day, the only successful seamer. Patrick Harrington was run out in Bedfordshire’s second innings.

“We had a great weekend with over 250 members , corporate hosts and guests enjoying hospitality in a marquee setting in the sunshine at Bedford Modern School,” said Bedfordshire Cricket Club President, Russell Beard.

“The attendance of the ECB chairman Colin Graves was an enormous honour and a reflection of how the hierarchy regard minor county cricket.

“Bedfordshire has to punch well above its weight to compete against larger counties who enjoy, generally, much greater resources than we have.

“The spirited determination in this team is obvious and this drove us to victory as a unit with , clearly , the spin twins of Tom and George being the main catalyst of the success.

“A spin friendly wicket made for some good old fashioned challenges with the result uncertain to the end.

“Hertfordshire played their part in a really exciting and hard fought match played in the best of spirit.”

Defending champions Berkshire it made two wins out of two by crushing Wales by 220 runs at the Falkland club in Newbury.

Former Middlesex slow left-armer Chris Peploe was Berkshire’s match-winner with a career-best match haul of 13 for 80 which included remarkable second innings figures of 15.5-8-14-7.

Wales lost nine wickets for 55 after an opening stand of 45 between Joe Voke and Thomas Bevan and only Majied Ilyas’ unbeaten 29 in a last wicket stand of 34 with Tomos Jones delayed Berkshire’s march to victory.

Herefordshire bounced back from a two-day defeat by Berkshire in the opening round by beating Devon by 32 runs at Eastnor.

Devon captain Alex Barrow, the former Somerset batsman, kept them in the hunt with a century but Dan Conway and David Ball shared eight wickets to snuff out the resistance.

Andrew took five for 38 in 12 overs and his new ball partner Russell White four for 12 to dismiss Shropshire for 131 with only Sam Whitney (42) and Ryan Lockley (25) reaching 20.

Tom Rash and Josh Cantrell shared a Suffolk eighth wicket record partnership of 136 to set up a 246 runs victory over Buckinghamshire at High Wycombe.

Rash made a maiden century in his 43rd Minor Counties Championship match and Cantrell a career-best 68 not out. Their partnership surpassed the 124 that Chris Swallow and Paul King added for the eighth wicket against Norfolk at Mildenhall in 2006.

Kadeer Ali’s decision to declare at Staffordshire’s overnight total gave his bowlers a full day to dismiss Lincolnshire. They got home in the final session after a day of patient teamwork with all seven bowlers used taking at least one wicket.

Dorset encountered stiff Cheshire resistance before they secured a 174 runs win at Bournemouth.

Dorset had all day to take eight wickets and it looked like being an early finish when Cheshire slumped to 80 for five with Brad Currie, who took his maiden five wicket haul in the first innings, claiming four of the wickets.

But Rick Moore, Cheshire’s white ball captain, dropped anchor for 188 balls for his 61 and there was further stubborn resistance from Jamie Crawley, Rob Sehmi, David Wainwright and Callum Rowe.

Wainwright, the former Yorkshire, Derbyshire and Hampshire slow left-armer, made 57 from 118 balls before Currie returned and dislodged him to take ten wickets in the match for the first time.

Former Leicestershire all-rounder Jacques du Toit pummelled a 76-ball century but it was not enough to bring Cumberland victory against Cambridgeshire at Netherfield.

Du Toit’s assault, which included his second 50 from just 26 balls, set up Cumberland’s declaration at 236 for four but Cambridgeshire recovered from 97 for six to bat out for the draw thanks to defiant innings from captain James Williams and Rob Sayer, another former Leicestershire player.

The pair added 76 in an unbroken seventh wicket partnership either side of a stoppage for rain.