Confusion reigns this evening as Bedford Town’s FA Trophy first round tie against Potters Bar Town was seemingly abandoned in the final minute with the Eagles 1-0 down.

A hot headed affair looked to have been settled by a second minute Potters Bar goal from Ben Ward-Cochrane but with the clock entering the red, the whistle blew and the referee walked off. 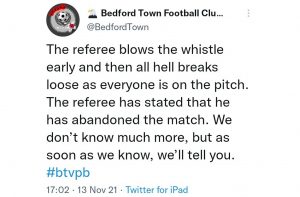 The game had been a fractious affair, with Charley Sanders earlier seeing red for two bookable offences, as well as a flurry of other yellow cards for both sides.

However, with the pitch flooded with players and coaching staff alike, the preceding ninety minutes may well be forgotten.

Comments from fans on social media branded the scenes “disgraceful”, but there has not yet been any official confirmation of what will happen next.

There has been precedent for games abandoned so late to be replayed, which may well be good news for the Eagles, but there is confusion as to whether it will be the case this time.

At 8:45pm on Saturday, Bedford Town released a statement regarding the events of the game:

“Bedford Town Football Club would like to sincerely apologise to any spectators who were disappointed with the incidents that took place in today’s FA Trophy match which resulted in the match being abandoned.”

“The events which occurred, involving a number of players and team officials from both ourselves and Potters Bar Town in the dying minutes of the match were unacceptable and do not represent the ethos of our club.”

“The club continue to speak with individuals from both clubs to establish more information on the events of the later stages of the fixture.”

“We are also liaising with the FA with regards [to] any evidence they need in response to the abandonment of the game.”

“At this time, Bedford Town FC are unable to confirm what the result will be following the abandonment of the match with regards to the tie being replayed or standing as a 1-0 defeat.”

“Both clubs are extremely disappointed at this incident arising in what had been a good cup tie.”

“We now await the referee’s report and explanation and also the FA’s decision on the outcome of this match.”