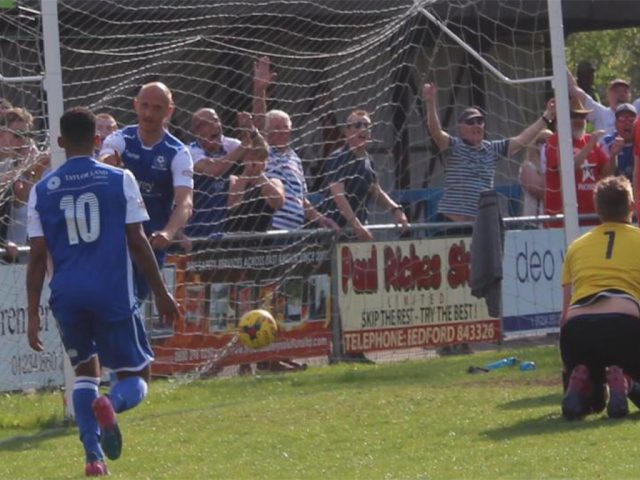 There’s a bright future for Bedford Town F.C. as they secured the three points needed to guarantee a playoff position and announced a major new sponsorship deal.

Before Monday’s match The Eagles used the busy end of season dinner to announce a new long-term corporate sponsor to take the club forward to 2024.

Team manager and joint owner Jon Taylor said: “I would like to personally thank Bright Management for committing to a five-year sponsorship deal for the naming rights of our stadium.

“This really does cement our aspirations and intentions at the club with us wanting to move in a positive direction to meet collectively a five-year plan for us to achieve football at step two.

“We are very excited that we have joined forces with a group of people that will definitely help put our town football club on the map again.

“This really does show our commitment to our loyal fans and also the community too.”

After the presentation the focus moved to the pitch.

Knowing that a win would secure a place in the playoffs, Jon Taylor made just one change from the team that won convincingly two days earlier, Joe Steele returning to his central defensive position.

The opposition, AFC Dunstable, have enjoyed a good run of recent form, and still had outside hopes of clinching a playoff place.

A few of the bumper bank holiday crowd of 321, out to enjoy the football as well as the splendid weather, will have missed the first goal.

It was scored in the first minute when Dunstable’s Nathan Frater, who was playing for Bedford until a few weeks ago, tried a shot from 22 yards that bobbled in front of Ashlee Jones, the home keeper, finding its way into the back of the net (0:1, 1’).

The match became a very niggly affair early on, with the referee showing the yellow card no less than four times in the first fifteen minutes.

The Eagles were now recovering from their shock start and were getting more chances on goal, Jack Vasey and Leon Lobjoit both having headers cleared.

Bedford continued to pile pressure on the visitors, until the breakthrough finally came in the forty-third minute after a free kick.

The ball was played forward to Vasey who beat the offside trap to score past Dan Green (1:1, 43’).

Deep in first-half injury time, Town took the lead as Ebby Nelson-Addy found the back of the net.

A corner was taken, and the ball got caught in numerous players’ legs a couple of feet from the line – Nelson-Addy got his foot in, shielded it, turned, and scored (2:1, 45’).

The second half saw Dunstable try to get back in the game, but despite their best efforts Bedford kept control of the pitch.

Brett Longden was carded for a foul and AFC Dunstable had a free kick near the left corner flag; the ball was played over and Vasey was at the near post to head the ball away, enabling Bedford to move upfield.

Bedford’s move was rewarded when a pass reached Dan Walker, and although he had Vasey and Lobjoit to pass to, opted to drag a low shot into the bottom left corner of the net from 20 yards, giving Dan Green a slim chance of blocking it (3:1, 57’).

Player/coach Paul Benson replaced Vasey for the remainder of the match, creating an immediate impact on the game by receiving a yellow card for kicking the ball away, despite the crowd’s unease over the decision.

This was likely Benson’s last home game for the Eagles due to him hanging up his boots next season, however the veteran hotshot went out in style, tapping in from close-range (pictured) after Bedford came down the left and crossed in via Lobjoit (4:1, 83’).

With five minutes remaining on the clock, Dunstable’s Martel Powell was shown red after he was awarded a free kick but retaliated on Nelson-Addy.

Three minutes into added time Benson glanced a header just wide, however as the referee signalled the end of the match, he would have to be content with his one goal.

With Didcot and Sutton Coldfield both drawing, our fourth-place finish and subsequent playoff match at Corby Town is virtually secured.

Before then, join Bedford Town at the last league match of the season next Saturday at Coleshill Town. 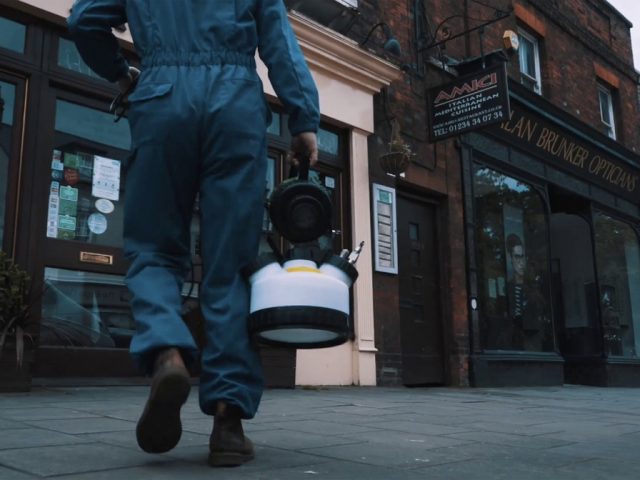 Bedford company at ‘front-line’ of defence against coronavirus