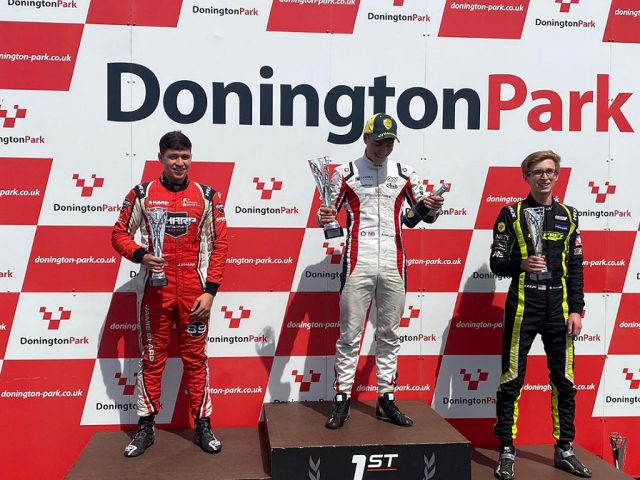 Bedford schoolboy Alex Walker, 17, came from 8th on the grid at Donington Park on Sunday as he jumped to the top of the National Formula Ford rankings in an action-packed weekend of racing.

Having finished third in the first round on Saturday, followed by a victory in round two, Walker’s finest performance of the weekend came on Sunday’s third race as he fought back from the fourth row of the grid.

That victory is Alex’s fourth win in the last four meetings, leaving him top of the pile in the National Formula Ford Championship, ahead of B-M Racing’s Rory Smith, and leading American, Max Esterson.

Reflecting on the race, Walker said: “Claiming my second national victory in my first full season is mind blowing, I can’t believe it!”

“My other competitors hold over twenty national and international titles between them, with drivers travelling from all over the world to compete.”

“It was a really exciting race and I had to fight hard to push my way past seven other drivers to claim the win.”

“My next race is at Silverstone and it’s always exciting to be at the British home of motorsport. I’ll be pulling out all the stops to repeat my performance last weekend at Donington.”

The race itself was an eventful one, with Walker waltzing through the field to fight Luke Cooper for second, passing him at the chicane and closing in on leader, Rory Smith.

At Macleans’, Walker made a late lunge for the lead but ran wide, with Cooper, in third, capitalising to move past both of them into the lead for the first time.

A few corners later though, Walker made an overtaking manoeuvre stick by passing Cooper at Redgate, with Walker pulling away to take the win by 1.8 seconds.

It’s been a remarkable rise for Walker, who started his motorsport career in karting and has stormed through the ranks; with his latest achievement, a scholarship into the FIA F4 Championship.

The next races in the National Formula Ford Championship take place on 6th June in Knockhill in Scotland before the biggest weekend of the year, just down the road at Silverstone, where Walker will look to take to the podium once more.

With the likes of Jenson Button, David Coulthard and even Aryton Senna all making it to the big time via the Formula Ford Championship, who knows what the future holds for Bedford’s latest motor racing star.