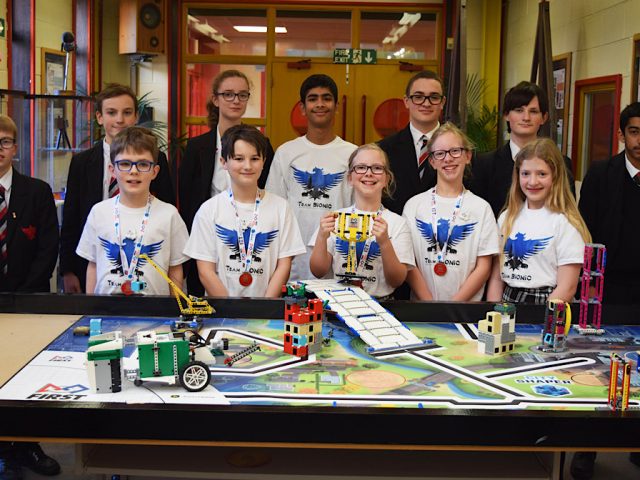 A group of students from Bedford Modern School have won the award for Best Designed Robot at the regional First Lego League tournament held at Cambridge University on Tuesday 14 January.

The team were required to programme their robot to complete a series of missions in a race against time. They then presented their idea for green roofs in cities by designing a Lego inspired roof tile.

The First Lego League is open to students aged 9-16 and focuses on solving real-world problems.

This year the competition title was ‘City Shaper’ and the aim was to show the students how cities and buildings grow, thrive, and change, allowing them to create new, innovative solutions to help shape an optimal future.

Discussing the day with Headmaster Mr Tate, one of the students said: “It was a great opportunity to learn new things and I really look forward to trying out my new skills at home.

“Now we’ve conquered the regionals we hope to get a chance to go on to the nationals next year.”

Year 7 student Elizabeth Scullion added, “This has been a really fun project. My role was mostly focussed on the research for the presentation but getting involved in all of the other areas was a great experience.”

Supervising teacher, Catherine Benson, commented, “I am so proud of all the students involved. All the work in the build-up to the competition has been entirely student-led and the majority of the team were taking part for the first time. They should be very proud of their achievement.”