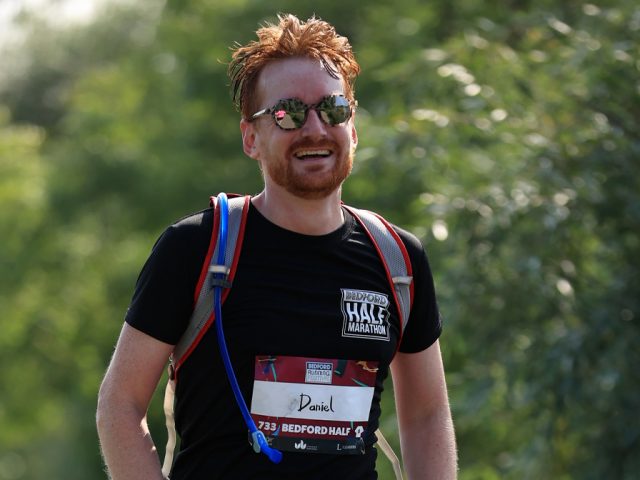 A Bedford runner who is taking part in the Bedford Running GP marathon on 17 October, has added an unusual challenge to his training schedule by racing the Sandy Heath Transmitter.

Radio test engineer, Daniel Churchill, is running to raise funds for Bedford charity, Living It Up, and has been running near Sandy as part of his training runs.

“I live near Priory Country Park, which is about 10 miles away from Sandy Heath Transmitting Station, our local TV tower,” explained Daniel.

“You might see this tall 244m mast on the eastern horizon on a clear day, or if you’re driving down the A1.

“While out on a marathon training run, I got as far as Sandy Heath and had a thought. Could I race the TV signal back home?”

Of course, racing an inanimate object that’s nearly 250m tall is not something that Daniel can literally do, so explains how he set the challenge with some clever science.

“Radio waves travel at the speed of light, which is a little bit faster than I can currently run.

“But just like the internet on your phone, Sandy Heath Tower transmits data over the air, in this case, 29 TV channels and 16 radio stations.

“Just like the mobile data, it has an associated speed.”

“Well, I can also transfer data; my phone has 64 GB capacity, my watch another 8GB, and I can move that data (run).

“Can I get this data back to my home faster than the TV mast can send it down the aerial on my roof? The race is on.”

Daniel describes the route as “very pleasant”, taking in as it does, the RSPB at Sandy, Cycle Route 51, Blunham, past the Danish Camp and Willington, before ending up at Priory Marina before his home.

“So Sandy Heath Tower won. Hats off to Judge Rinder who was on ITV at the time.

Could you ‘take on the tower’ and win?

If Daniel can go faster than 5:48/km, he believes he can beat the tower and is throwing down the challenge to any other distance runners in the area.

“I’ll keep trying to beat the radio. In the meantime, though I wasn’t lucky enough to get into last week’s London Marathon, I will be going the distance around Thurleigh at the Bedford Running GP on 17 Oct.

“I’m running for Bedford’s own Living It Up CIC, an amazing group running events for adults with learning disabilities.”

You can support Daniel’s fundraiser here.