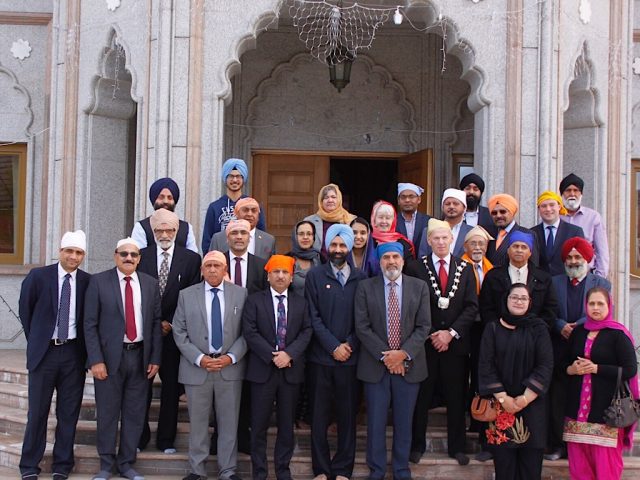 From 18 to 20 October, the Guru Nanak Gurdwara, one of the latest Sikh Temples of East of England organised an exhibition, multi-faith talks and Turban awareness session in Queens Park.

The events were supported by the county’s leading community, voluntary, charity and interfaith organisations and groups.

A photo exhibition on the life and teachings of Guru Nanak was organised in collaboration with the Indian High Commission which was on display for three days.

This exhibition was inaugurated on the 18 October by the Deputy Lieutenant of Bedfordshire, Professor Garch Randhawa and the MP for Bedford, Yasin Mohammed alongside Borough Councillors and community and faith-group leaders.

The exhibition highlighted the life and philosophy of Guru Nanak and the relevance of his teachings to the modern world and for all communities.

Prof Randhawa said, “It is an honour to represent HM Lord Lieutenant Helen Nellis on this special occasion.

“The exhibition represents the messages of Guru Nanak about equality, diversity and community cohesion, and I would like to congratulate  SEVA Trust UK, Guru Nanak Gurdwara and the Indian High Commission for this wonderful effort.”

India’s Deputy High Commissioner to UK, Charnjeet Singh, Mayor of Kempston Cllr Carl Meader, Cllr Henry Venn (representing the Mayor of Bedford) and speakers from all faith groups joined in for the Sunday events that included talks on Guru Nanak, presentation on the history of the turban and importance and significance of the Sikh turban.

The event was concluded with a colourful turban tying session and attendees tried a turban of their choice of colour and all received a free turban.

The Deputy High Commissioner said, “Guru Nanak’s teachings are universal and these celebrations help to share and highlight the teachings among the wider communities.”

Kempston Mayor Cllr Carl Meader, who opened the turban awareness session said, “Before today I was not aware about the real importance of the Sikh turban.

“This session helped many of us from non-Sikh backgrounds to fully understand the history and significant of Sikh turban.

“I would like to congratulate the organisers for this commendable effort and I am looking forward to joining in for the turban tying session and eager to see how I look in a turban!”

The SEVA Trust UK chairman, Charan Sekhon said, “This was a historic event in Bedford that brought all communities together.

“We would like to thank members from Gurdwaras, Churches, Temples, Mosques and all community, voluntary and charities group representatives and business leaders of Bedfordshire for attending this event and supporting us.

“We are so pleased that over 500 people of all ages and families attended this event and the turban tying event attracted a huge interest with all guests.

“Sikhs are a very hardworking and peace loving community. It’s unfortunate that we are still subject to hate crime and racist attacks and we believe education is the only way to highlight the reason why Sikhs wear turbans and sharing Guru Nanak’s message of respecting all faiths, supporting all communities through Seva (selfless service), peace and prompting  community cohesion.”