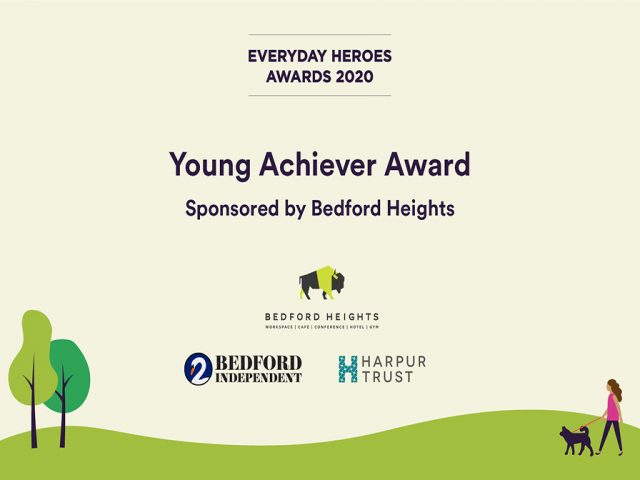 As we continue our build-up to the Bedford Independent Everyday Heroes Awards, in partnership with The Harpur Trust, we’re taking a closer look at the nominees in each category.

Today we’re shining a spotlight on the Young Achievers across Bedford Borough and giving you a short insight into why they’ve been nominated.

In the face of many personal challenges, Cheyenne was still able to apply herself to achieve a string of qualifications to her name as well as resitting her Maths and English GCSEs.

Cheyenne developed her core skills and stood out as a strong leader. She was nominated Student Ambassador by other students at SSG and she represented her peers as the ‘student voice’.

Cheyenne set a high level of expectations and supported various events with SSG including raising money for charity and volunteering at local community events.

Over the last two-years, Cheyenne has demonstrated that having barriers and challenges shouldn’t stop anyone from wanting to achieve their goals.

She has shown drive and passion to improve her career opportunities and is now able to share her skills and qualities within an environment that is changing children’s lives in their education.

Eddie has a range of passions and skills under his belt already. Eddie has piano lessons and also learns the cello through Bedford Music Hub. He creates art every week at Creative Days.

He wanted to begin his Arts Award journey to further his creativity with artwork and crafting as he felt like his music was progressing through his lessons and exams.

Eddie has roared through his first Arts Award level and is onto completing the next level: Explore.

Eddie has been very enthusiastic about the projects we’ve been delivering, including Gigs4Kids and the Culture Challenge.

Eddie’s enthusiasm for the arts and creativity seems to know no bounds as he is always seeking the next big thing and is always on the lookout for new ways to challenge himself.

Elizabeth first went to a BMX track when she was just six-years-old and first represented Great Britain aged eight and has since been ranked number five in the World for the last two years and is aspiring to compete in the Olympics.

She is developing a great love for the sport and this year she is very excited about qualifying again for the 2020 World Championships, this time in Houston, Texas. Although she is now only 11 years old, she is already a very focused young lady.

Last summer 2019 the World Championships took place in Belgium and Elizabeth was up against 73 riders in her category. They were extremely tough and hot conditions with the girls racing in 40° heat.

Elizabeth has also been nominated for British Cycling’s Regional School of Riding (RSR), which is typically aimed at riders between 13 and 15, Elizabeth has been brought onto the programme earlier, adding credibility to her Olympic aspirations.

Heath first heard of the Bedford Langar Project when his school, Rushmoor School, donated their harvest festival produce to the charity in 2016, so they could provide hot authentic Punjabi Curry meals for the Homeless, families, individuals and those in need in Bedford.

Heath, and his grandfather, were impressed with the work of the project and wanted to volunteer. Heath began by dishing out the meals with the charity in the local community. Heath wanted to do more, so every year he arranges a raffle at his grandfather’s work to raise money. Last Christmas he raised £250.

Heath invites the Bedford Langar Project to school to speak to all pupils and will continue to volunteer and raise money for this charity as he has seen first-hand the good they do in Bedford.

14-year-old Varun is a young disabled wheelchair usee and was the first member of the newly formed Wheelchair Racing section of the Bedford and Country Athletic Club.

Varun quickly adapted to racing wheelchairs and it wasn’t long before he began to show his potential, amazing everybody who saw him. Within six months, he was racing in the London mini marathon from Tower Bridge to Buckingham Palace – he finished 3rd for his age group.

In the 18 months he has been racing he has continuously posted personal bests in track events during the summer of 2019. He was awarded the prize for the Young Disabled Sportsman of the year at the Bedford Sports Awards.

He also volunteered to work with the Backup Trust in London. Having been on a training course, he will now be going on his own to Exmoor during school holidays with the Trust to help those under 13 with spinal injuries.

Will came up with the idea for Young Rugby, a platform on Instagram which supports, inspires and advises young rugby players interested in pursuing a professional career in the sport.

Its objective is to bridge the gap between grassroots young rugby players and their professional idols to help them to achieve their rugby dream. It now has 8,000 followers.

Professional rugby players in the premiership and championship take part in interactive Q&A sessions, allowing followers to find out more about their ‘heroes’.

Will also produces showreels for up and coming young players, showcasing their talent online to a captive audience.

The important issue of young people and mental health is a consistent theme, and Will has dedicated posts and features, including an interview with charity Sporting Minds, raising awareness to enable positive mental health in young sportspeople.

Zayaan is a great example of a young person who works hard, gives 100% effort, and is an excellent role model.

in 2018, Zayaan looked to compete in the World Kickboxing Championships in Jamaica Championships, not only did he have to overcome sporting challenges, he also had to overcome financial challenges to secure the funds to get himself there.

He took it upon himself to approach local companies to seek sponsorship, demonstrating real tenacity and initiative. Zayaan went on to become national champion in Jamaica.

Zayaan had been competing since a young age, but is just as committed to his academic studies at school and now at Kimberly College.

He is an ambitious, conscientious and motivated individual, extremely proactive and has gained work experience off his own back in his chosen field of computer science.

You can find out who has been named Young Achiever of the Year in the Bedford Independent Everyday Heroes Awards on 25 March 2021 at 7:30 pm on our website, Facebook Page and YouTube channel.