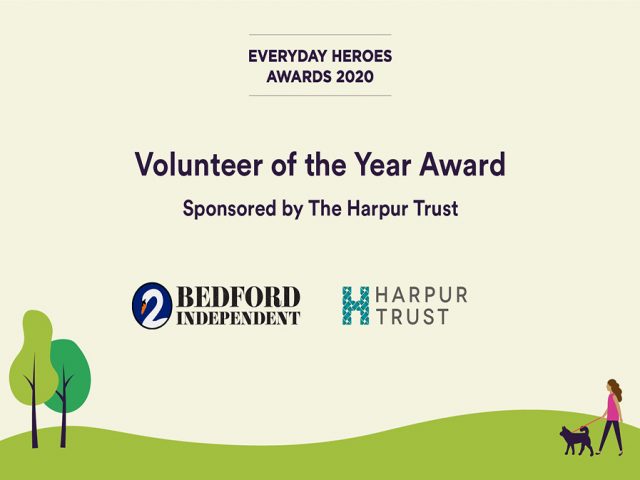 Today we’re looking at Bedford Borough’s volunteers, who all deserve a round of applause for being nominated. Read on to see a short insight into why they all deserve our thanks.

Volunteer of the Year – sponsored by The Harpur Trust

Carol has been volunteering at Sue Ryder St John’s Hospice for eight years in the fundraising department. During her time volunteering at the hospice, Carol has shown that she is a truly dedicated volunteer and that everything she does is to help raise as much money as possible for our hospice patients and their families.

Over the past year though, Carol’s support has increased as she has decided to be part of the volunteer events committee for the hospice. This support meant that Carol attended charity stands on our behalf and helped arrange the incredible Country Fete and Festival back in August. This event took commitment for over eight months and Carol chose one of the main roles as committee Treasurer.

Frank has never ceased to put social justice and care for society’s most vulnerable and disenfranchised at the heart of his work, and since his retirement as a headteacher in 2005 he hasn’t chosen to put his feet up, rather he has continued to work tirelessly as a volunteer. He joined Emmaus Carlton as a Trustee for two years and was Chair of Trustees for a further eight years.

He also volunteers as a Trustee for Project 229, an extraordinary organisation that brings a wide range of services to the community in Kempston, a town that holds a place in his heart given his long service as the headteacher of Robert Bruce Middle School.

Friends of Keech Bedford is one of Keech Hospice Care’s greatest assets. Through countless events and volunteering thousands of hours, they have raised an incredible £66,000 for the charity since 2006 and £5,000 in 2019 alone. We cannot begin to measure the impact of their time and support makes.

As its name suggests, the fundraising and volunteering group are friends of Keech, originally created to raise awareness of Keech Hospice Care’s children’s service, which cares for and supports children with a life-limiting and terminal illness, and their families, at the hospice and in homes, schools, and hospitals across Bedfordshire.

Joanne spends almost all of each Monday organising and running St Andrew’s Brownies group meet, despite having Fibromyalgia, which often brings her to her knees. She also organises annual week-long pack holidays, sleepovers, carol singing, fun days, theatre, museum and London trips, the River Festival parade, making the costumes and props, so the girls can participate.

In October 2018, also Joanne set up a social/educational group for the Young Unaccompanied Refugees in Bedford, “Phoenix Rising”. Along with two others, she helps the Y.A.R. with college work, learn about UK society and their new life, socialise, build new friendships, and have fun through a series of life skills classes she has designed.

Jim is an inspiration, a volunteer whose sheer determination and passion keeps the Golden Gardens Community Garden in Goldington thriving. Without Jim’s passion, commitment and drive the local community would not have such a wonderful garden facility to enjoy.

Jim singlehandedly maintains and runs the garden, ensuring it is open for visitors daily throughout Spring, Summer and Autumn. The garden opened in September 2008 and was initially funded by the National Lottery. In 2018 it celebrated its 10th anniversary and a community barbeque was attended by many local people who celebrated a decade of achievement.

St Augustine’s Road set up a resident’s association (SARA) in 2010. One of its focuses is Bedford Park at the end of the road. Concerned by the council-cutting back on staff numbers, SARA initiated a volunteer gardening group. In its early days, it was largely residents of the road who committed to a two-hour session on the first Sunday of every month. But, Lindsey took on the organiser role and responsibilities and started to send out regular emails to participants reminding them of their session and the meeting place.

From a steady base number of around six to eight people, suddenly, and through Lindsay’s efforts, people from other parts of Bedford joined the group which now numbers 15.

St John Ambulance is the nation’s leading first aid charity and Steve is a member of the Bedford John Bunyan Unit. The unit is very active and Steve has spent countless hours as a St John Ambulance volunteer at local festivals, such as at the River Festival, and at a number of sporting events, including charity runs and helping to raise money for the service.

He has also attended Bedford Rugby Club games as a St John Ambulance volunteer and given time to support St John Ambulance teams further afield at many events such as the London Marathon, keeping people safe and administering first aid, dealing with everything from a sprained ankle to a cardiac arrest.

Sue symbolises all that is great about so many of the 100 Carers in Bedfordshire volunteers: totally committed, totally trustworthy and totally versatile. Having been a carer herself, she knows full well that family carers often put their own needs last, feeling exhausted, isolated and guilty about getting help for themselves.

She came to us when first caring for her aunt with whom she was very close. To do this, she gave up her own catering business but found she needed an outlet. She became a telephone befriender to help others, showing empathy and sensitivity.

I am nominating Susie Spyropoulos for this award because she deserves to be recognised for the unwavering commitment, she has given to the charity Yarl’s Wood Befrienders.

Susie was inspired to volunteer for this charity after reading an article in a local newspaper about Yarl’s Wood Detention centre and the charity ‘Befrienders’. With Yarl’s Wood located so close, just five miles outside of Bedford, and with about 100 women detained there indefinitely, Susie’s immediate reaction was to make time in her busy schedule (Susie teaches full-time as well as raising a family) to help these vulnerable women.

That was over five years ago and she has been attending the centre every single week since.

You can find out who has been awarded the Bedford Independent Everyday Heroes – Volunteer of the Year Award on 25 March 2021 at 7:30 pm on our website, Facebook Page and YouTube channel.