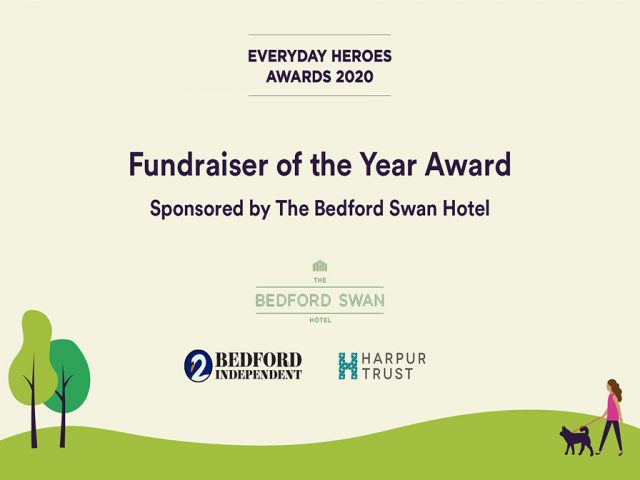 Last but not least, we’re shining our spotlight on the superhero fundraisers in our community and giving your a brief insight into why they deserve the award.

Bedford is acknowledged as being one of the most generous towns in the UK and our nominees all prove that this is most certainly the case.

Fundraiser of the Year Award – sponsored by Bedford Swan Hotel

“Emma is well known as the former owner of the Kiosk and Pavilion in the Park, making these two small businesses a community hub,” said her nomination. “Less well know is her extraordinary fundraising in 2019.” After battling cancer since 2009, Emma’s beloved husband died on 22 December 2018. Coping with grief and staying strong for her five children Emma has also raised extraordinary funds for St. John’s Hospice Bedford, Primrose unit and the Bobby Moore fund. She has done this through Challenge 51 – a remarkable series of events including jazz performances, sponsored walks, brunch, lunch, climbing, running, marathons and Mount Kenya. All this on top of Soupfest 2019 for homeless and running her two café businesses. “She is extraordinary. She is strong.”

“Friends of Keech Bedford is one of Keech Hospice Care’s greatest assets,” said their nomination. “Through countless events and volunteering thousands of hours, they have raised an incredible £66,000 for the charity since 2006 and £5,000 in 2019 alone. “We cannot begin to measure the impact their time and support makes.” Mary W is the driving force behind the group: with her husband David (who sadly died in 2018), Mary has selflessly volunteered her time to raise valuable funds for Keech since 2006. Touched deeply by a talk given at Bedford Rotary Club, they were inspired to give back and kicked off their fundraising with a 100-mile walk, raising over £2,000. The group took its fundraising to another level in 2007 organising a Christmas sleigh to take Santa around Bedford and surrounding areas. The sleigh has raised £2,000 every year since it began and a whopping £4,500 in 2019. “Friends of Keech Bedford never ask for any recognition in return,” said their nomination. “Friends of Keech Bedford make a tangible contribution to the Bedford community and we can’t thank them enough.”

Heath first heard of the Bedford Langar Project when his school, Rushmoor School, donated their harvest festival produce to the charity in 2016. The Bedford Langar project provides hot authentic Punjabi Curry meals for the Homeless, families, individuals and those in need in Bedford. As they rely fully on donations, they are currently only able to do this one Sunday a month. “Heath, and his grandfather, were impressed with the work the Bedford Langer Project did and wanted to volunteer,” said his nomination. “Heath began by dishing out the meals on the one Sunday a month the charity would supply food to the local community. Heath wanted to do more, so every year he arranges a raffle at his grandfather’s work to raise money. Last Christmas he raised £250!” Heath has invited the Bedford Langar Project to his school to speak to all pupils to raise awareness and also inspire others to volunteer like he does.

In October 2019, Katy and Joe climbed Mount Kilimanjaro, Tanzania, to raise funds for the SMART Prebend Centre in Bedford. “The final total raised was a staggering £3,144 – one of the largest single donations made to the SMART Prebend Centre in 2019,” said their nomination. “And that’s why we want to nominate this courageous couple.” Katy and Joe took on the challenge in memory of Joe’s mum, Gail. Gail sadly passed away after losing her battle with alcohol addiction. This wasn’t the family’s first time dealing with the awful heartache of alcohol abuse. Gail’s Brother, Richard, lost the same battle just the year before. The couple’s aim is not just to raise the much-needed funds to support SMART Prebend Centre but it’s also to raise awareness on substance misuse. They said: “Everyone deserves a chance to make a positive change to theirs and their families lives with help and support.”

In 2019, Nikki Horner decided 2020 would be the year she would run Virgin London Marathon for Whizz-Kidz. Whizz Kidz have helped 18,000 children, providing them with life-changing wheelchairs. Along with helping disabled children, Whizz Kids also run 43 clubs across UK, where young people can learn life skills and make new friends. “By day Nikki works at Grange Academy – a Special Needs school for young people in Kempston,” said her nomination. “But when the bell rings for home time, 47-year-old Nikki swaps the classroom for the pavements as she pounds the streets in training for a remarkable running challenge.” On Sunday 26 April 2020, Nikki was due to complete the Virgin London Marathon whilst wearing a Rubik’s Cube. Due to Covid restrictions, she had to run a virtual marathon, but Nikki completed the 26.2 miles in the custom-built Rubik’s cube costume through the streets of Bedfordshire. Nikki has raised over £3500, ran over 905 miles in 2019, put on numerous events, raffles and quiz nights – working hard to transform the lives of disabled children across the UK, supporting them to become confident and independent young adults. Nikki also raises money for Friends of Grange – the school she works at.

“Paul of YMCA Bedfordshire is far too humble about the fundraising work he does and the achievements he’s made on behalf of the YMCA Bedfordshire,” said Paul Kellett’s nominator. “He raised a huge sum of money and donations of furniture, toiletries and other supplies to support the various service we provide to the community here in Bedfordshire.” Paul built up awareness in a series of events to support YMCA Bedfordshire’s fundraising, achieving a total of £220,738. “Paul’s success lies in his absolute dedication and belief in making our communities a better place to live for vulnerable people,” read the nomination.
“Paul conducts himself with sincere motives, born out of personal experience and he shows empathy for those we serve. His behaviour day-to-day is indicative of our organisations brand and he works, lives and breathes our mission and brings this to life in his every act.”

You can find out who has been awarded the Bedford Independent Everyday Heroes – Covid Hero Award on 25 March 2021 at 7:30 pm on our website, Facebook Page and YouTube channel.