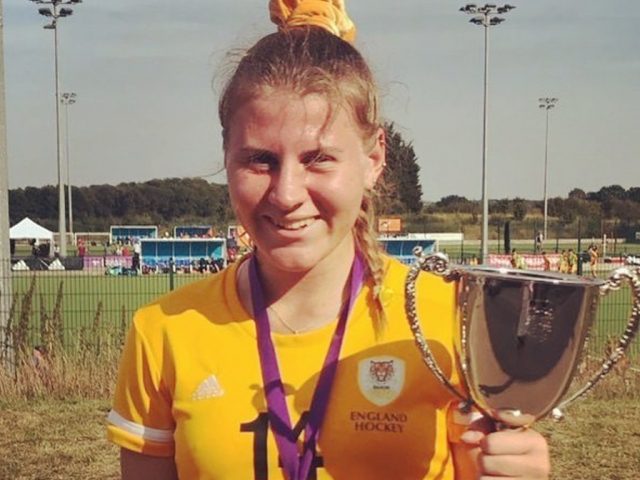 Florence, and her Girl’s Under 15s team, Saxon Tigers, put on a Gold medal winning performance, remaining undefeated throughout the four-day England Hockey tournament, Florence finding the back of the net in her very first match playing for the squad.

After a nervous few days of waiting, Florence, and her Bedford Hockey Club teammates, were delighted to hear the news that she has earned her a place in the England U16s squad.

Selection to the NAGS is the highest honour obtainable for a junior hockey player. Her selection means she will now attend training camps and play in international matches.

Florence will, also, receive support and advice from England Hockey’s coaches, team managers and physiotherapists to guide her through her development as an athlete, including topics such as anti-doping, nutrition, strength and conditioning, injury management and psychology.

Florence’s Gold takes the tally of medals achieved by Bedford players, during the summer months, to five.

Three of the awards, two Golds and a Silver, came in International Masters’ competitions and the fourth, another Gold, in Regional Masters.

The goldrush began in May, when Bedford Ladies’ 1st team player, Rebecca Budd, returned with her Gold medal, after her East Masters Ladies’ O40s squad were undefeated winners of their regional tournament.

In June, came a Gold for Alan Rushton, Alan and the England Men’s O70s team showing off their sporting prowess in the European LX Masters’ Cup in Antwerp.

Next in the spotlight was Yvette van Yperen, stepping out for the England Ladies’ O35s in Rotterdam in July. Yvette, and the team, certainly delivered, taking every match of their tournament to return as champions.

On into August and Bedford Masters’ player, Pam Begg, travelled to Krefeld in Germany to represent her birth nation of Scotland, in the Ladies’ European Masters O55s.

Having been dominant throughout the group stages, Scotland faced England in the final. England’s power, on that occasion, however, proved too much, Pam, and her team, taking the highly commendable Silver.

On 28th and 29th September, Bedford Hockey Club is supporting a national initiative to try and promote the domestic game at grassroots level.

The #WatchYour1s campaign is being endorsed by The Hockey Paper.

The weekend will see both the Club’s first teams, the men and the ladies, playing their first home National League fixture. Come along and see Bedford’s top players in action. Free entry for spectators.