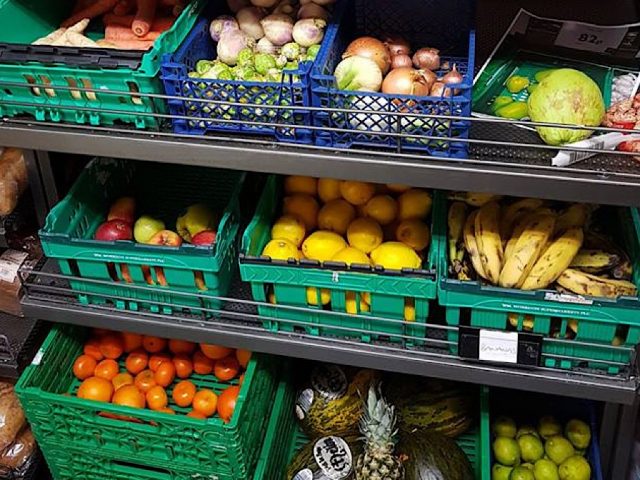 Local charities, the Bedford Community Larder and the Amicus Trust, benefited from supermarket giant Aldi’s commitment to making the most of their unsold fresh food this Christmas.

The Bedford Community Larder is run entirely by volunteers from the ReUse Centre on Gadsby Street. It supports 70 service users daily, with fresh food.  The Amicus Trust empowers homeless adults to find employment and build the skills to run their own home.

“Access to surplus food through partnerships with supermarkets is becoming increasingly important to food bank charities,” Gareth Minor of the ReUSe Centre, told the Bedford Independent.

“The ReUse Centre has been working across Bedfordshire for over twenty years and we’ve seen an increasing trend in the number of people requiring poverty related support. In response to this we launched our food bank, the Bedford Community Larder, in January 2018, working in partnership with another local charity, Dine With Us On The Streets.

Unlike many food bank operations, the Bedford Community Larder welcomes the donation of perishable foods allowing us to provide fresh produce to our service users.

A year on and we find that our Community Larder project is rapidly growing in response to demand, and the regular support we receive from supermarkets is critical in supporting this essential service.

We now have partnerships in place for weekly surplus food collections with nearly 30 food outlets across Bedfordshire including Budgens, Co-op, Costa, Greggs, Lidl, Marks & Spencer, Morrisons, Nando’s, Sainsbury’s and Tesco. As colder weather sets in, families find themselves unable to cover the basic costs of living such as heating bills, food and other essentials and their reliance on food bank operations such as the Bedford Community Larder is now higher than at any time in charity history.

Without access to surplus food through supermarket partnerships, the issue of food poverty across the UK would be far more severe than it currently appears. Along with the food we collect from our established regular partners, the Christmas Eve donation from Aldi is a welcome contribution at a time of year when food larder demand is at its very highest.”

Aldi paired over 500 stores across the UK with local charities and food banks donating 53,856 meals to 34 charities after stores closed on 24th December 2018.

“From a strategic perspective, The ReUse Centre has concerns that food aid risks becoming institutionalised, ultimately absolving the UK government of its moral obligations related to food poverty.

Whilst the UK as a whole produce around 10 million tonnes of food waste per annum (2015 figures from WRAP), there seems little incentive to move the UK away from its reliance on charitable food aid and address the wider problems of food insecurity.

During 2019, The ReUse Centre will be looking to further develop food retailer relationships and build on what is already a valued partnership foundation…and with this in mind we hope to see retailers such as Aldi extend their support to a year-round model, because after all, food is not just for Christmas!”

Fritz Walleczek, Aldi’s managing director of corporate responsibility, said: “The feedback has been overwhelming and we’re delighted that we’ve been able to go above and beyond with our donations this year, and reach so many people in and across the East of England.”