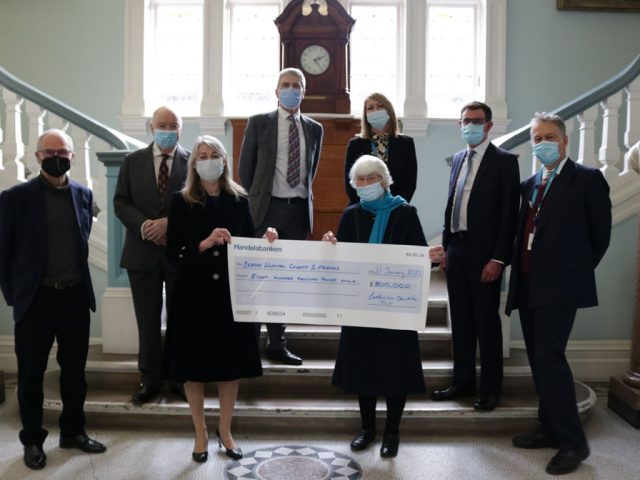 The donation, which the charity has described as ‘amazing’, was pledged by Bedfordshire Charitable Trust (BCT), formerly known as the Ibbett Trust, a charity founded by Clifton Ibbett and his parents Claude and Gladys Ibbett in 1964.

Shortly after Mr Ibbett passed away last May, Deborah Inskip (Chairman of BHC&F), was invited to meet the trustees of the BCT to discuss their desire to support the CT scanner part of the charity’s ‘£1m for Bedford A&E’ appeal as a permanent recognition of his life.

Over the last few months, the two charities have been in close discussion and together, towards the end of 2021, were hosted by the A&E specialists and senior executive of the Bedfordshire Hospitals Trust, on a visit to view the extended and re-developed A&E department.

During this visit, the trustees of BCT highlighted additional areas to which they felt they could also add their support to make improvements and give facilities, particularly for education and training, over and above those already planned.

Margaret Ibbett, Clifton’s widow, said: “This donation recognises the genuine love Clifton had for Bedfordshire and its people. His deep and personal interest, underpinned by Christian faith, in improving people’s lives was clear to all who knew and met him.”

BHC&F chair, Deborah Inskip, added: “It has been an absolute pleasure to work closely with the Trustees of BCT as they moved towards the decision to make a significant donation in Clifton’s memory.

“Clifton was a very dear friend to so many of us and gave so much to many aspects of life in this county, it’s wonderful that his life is being celebrated in this way.

“I can certainly feel his gentle, generous and guiding hand in all that you are doing. Immense thanks and gratitude from us all.”

The installation of the new CT scanner and completion of developments for the A&E department are likely to come to fruition this autumn.