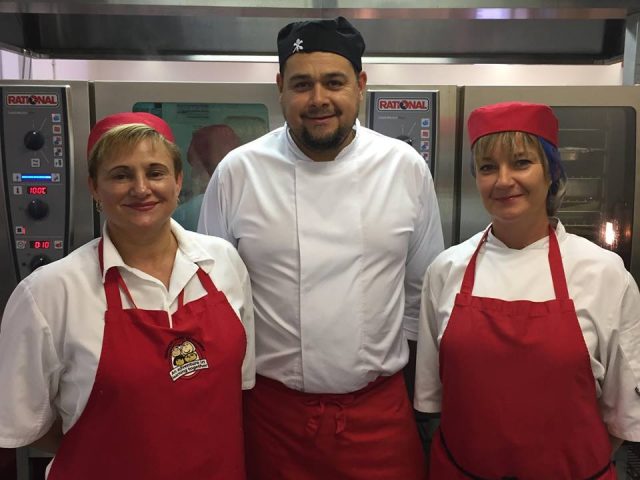 When the Kitchen Manager at Queens Park Academy anticipated they’d be short staffed for a couple of weeks, she knew just who to ask for help.

Ileana Stein, who has headed up QPA’s school kitchen since January called on the chef at Herd, who just happens to be her husband, to lend a hand. The partnership has been a huge success and today, teaching staff were treated to a gourmet burger lunch to celebrate.

Unlike many schools in the Borough, Queens Park Academy does not employ an outside caterer to provide school meals. The in-house team cook hot meals from scratch for the school’s 432 pupils. Since Ileana joined the team in January, student take-up of school meals has increased by over 30%.

“As soon as she came on board, Ileana immediately engaged with the children,” said Stuart Evans, QPA’s Business Manager. “Once she’s finished serving the food she’s out of the kitchen and chatting to the children. She’s brought a brilliant spirit to the kitchen and to the school. Ileana is Romanian – but speaks several languages – and her team includes Polish, Spanish and Bangladeshi. This diversity reflects the culture of our school.”

Traditionally, the school had found it hard to encourage parents to come into the school. They began inviting parents to have lunch with their children for special occasions such as Mother’s Day and Father’s Day and it has proved so successful that they now provide five spaces per day for parents to join for lunch.

Walter, who is usually to be found at the restaurant and bar on St Cuthbert’s Street looked as at home cooking pizza for the pupils’ lunch as he does flipping Herd’s gourmet burgers.

“It’s been great having Walter here,” said Stuart. “The kids think he’s famous and off the TV! We’ve already invited him back for Christmas.”