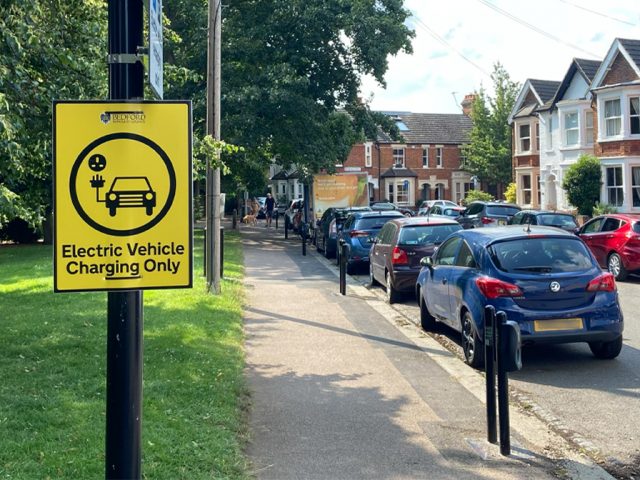 Bedford Borough Council has been warned not to “become complacent” after it was revealed the area has double the regional average of electric vehicle (EV) charging points.

Figures from July show there are 49.8 EV charging points per 100,000 Befordians.

There are also more rapid charging points in the Borough. Considered the most useful form of power for everyday EV users, there are 10.9 per 100,000.

Mayor Dave Hodgson called the work to install the charging points across the Borough “an important part of driving down emissions and making sure we reach our commitment to be a net-zero carbon council by 2030.

“Nowhere better in the East of England to own an electric vehicle,” he said, adding that the Council is committed to increasing numbers of charging points across the Borough.

However, Green Councillors have warned the Council not to become complacent and not put too much emphasis on EVs.

“Yes, EVs have a part to play in our future, said” Cllr Lucy Bywater (Green, Castle), “but people put far too much emphasis on them. COP26 did, and we worry Bedford Borough Council is.

“Neither has been paying enough attention to public transport and active travel [like] walking and cycling.

“EVs still consume a lot of energy when we need to cut energy consumption, they are still traffic, still lead to parking problems, and on top of this, it takes a huge amount of resource to manufacture an electric car.”

The Green councillors say that Bedford might have a high number of charging points because there is more need.

They say there are not enough “really good” facilities for safe cycling and on-street parking is the only option for a high proportion of homes.

“To know whether the numbers are as good as the council claims, we need to compare with the need,” said Cllr Bywater.

Cllr Charles Royden (Liberal Democrats, Brickhill), portfolio holder for highways, transport and environment believes the charging points will have a significant impact on carbon emissions and air quality in our Borough.

“The government have consistently failed to follow up their words with real climate action.

“Their decision to cut the Plug-in Car Grant earlier this year is a clear sign that they cannot provide the strong action we need that will lead to a zero-emissions future.”

However, Cllr Ben Foley (Green, Castle) reiterated the need to spread environmental targets across a number of projects.

“While we do need a gradual roll-out of charging points,” he said. “Electric Vehicles are expensive to buy, and people having to charge on-street have to pay much more than those who can charge at home.

“We’ve been pressing the council to take action to allow people to safely run cables across the pavement in channels so those living in terraces can home-charge their cars.”

Cllr Bywater and Foley say that longer-term goals should include more “shared mobility” such as Car Clubs that helps people who can’t afford EVs and reduces the need for parking.

If you believe there is an area that could benefit from EV charging points, please email highway.consultations@bedford.gov.uk.