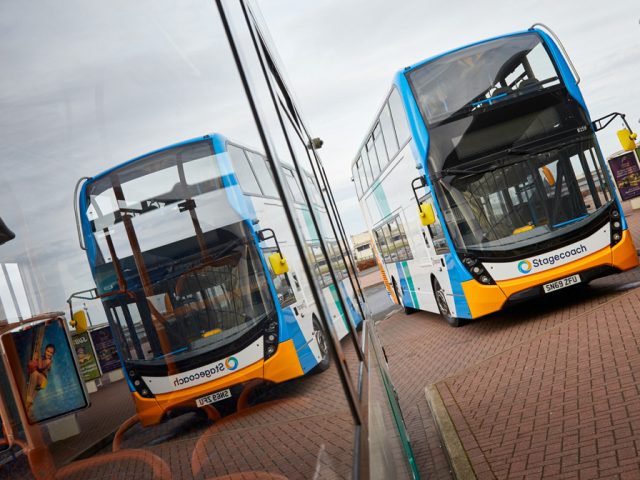 Changes in bus services are making it harder for Bedford borough residents to get to work on time – and misleading timetable information is making it worse.

A report presented to the Environment & Sustainable Communities Committee said public transport in the borough continues to be significantly affected by the Covid-19 pandemic, but stakeholders are working to “plot a path out of the current situation”.

Cllr Jonathan Abbott (LibDems, Oakley Ward) said the report notes that there has only been the removal of a marginal number of commercial services since the pandemic funding was removed.

“Has that changed this week?” he asked.

“Because I’ve noticed that Stagecoach have introduced quite a number of changes. It has certainly affected my ward, because the buses have been cut in half.

Cllr Sarah Gallagher (Conservative, Eastcotts Ward) spoke about how residents are getting into work late after Stagecoach stopped the Number Nine bus from 7am.

She claimed that buses were so overloaded that people working in the borough and teachers at special education schools were arriving late to work because “they cannot physically get on the bus”.

Matthew D’Archambaud, chief officer for highways, transport and engineering at the council, said: “As you say councillor Abbott, this report was produced probably two or three weeks ago, and even in the two or three weeks subsequently, whereas we were hoping it started to level off slightly, we have seen a bit of a run on commercial services in the last couple of weeks.

“We’re doing everything we can as an authority, we certainly went to bat for the bus industry, we went back to the DfT [Department for Transport] before Christmas, we actually got an increased settlement in terms of the last tranche of bus funding available for commercial services.

“Whilst lots of areas of the country might be getting back to normal, unfortunately, I would say bus services are on a really long lag behind everything else at the moment.

“We’re certainly keeping a very close eye on it and working closely with operators, because it’s very much been our interest to have a thriving commercial bus market, as it’s such a big tranche of our sustainable transport offer.”

Cllr Gallagher also mentioned the information given at the Stagecoach Bus Station.

“The timetables were saying something completely different from what the app was saying,” she said.

Mr D’Archambaud said: “We pay Stagecoach to update the information in the bus station. I’ve had a similar conversation and a similar line from another councillor on the same instance, so I’ll certainly be making representations to them.”

He added that given the current climate, when bus companies are desperate for passengers, getting the right information out to customers should be paramount.

“They’re in a very difficult spot, but they’re not helping themselves, frankly, by doing that,” he said.

Cllr Tim Hill (LibDems, Elstow & Stewartby Ward) reminded the committee that Stagecoach isn’t the only bus operator in the borough, and said that Grant Palmer is the main operator in his ward.

“The council doesn’t run the buses, it’s a private company called Stagecoach who run the buses. And it’s in their interest if a route is loss-making to actually run it down.

“Let’s not be naive, let’s not just say we want this service now, then and there, the borough does not have the power to do that.

“All the borough can do with Stagecoach is lobby and pressurise, Grant Palmer is different because they run primarily a subsidised service,” he said.

Cllr Roger Rigby (Conservative, Bromham & Biddenham Ward) said: “I’ve been on the council for 20 years, I’ve sat on most committees that have had wheels, and at all times Stagecoach’s first priority in life is to protect their profits and it’s usually come at the expense of people who find that their bus service has lengthened or their bus services has disappeared.”

“We’ve been through it over a number of years and it’s a question if you don’t use it you lose it, which is a very sad situation to be in.

“Because not only do you lose it but everybody else loses it as well,” she said.

Grant Palmer’s managing director, Dave Shelley, said: “Transport operators nationally are dealing with a combination of the carry forward from last autumn’s national driver shortage, and the impact of a Covid spike locally here in Bedford.

“This has impacted most services, with emergency timetables operating on a number of routes. We are working hard to overcome this, with additional drivers coming on stream, an internal reorganisation of how we cover services, and improving the ways we communicate with customers and the information offered.

“We are sorry for the inconvenience being caused in the interim.”

David Boden, business development director at Stagecoach East, said: “To improve the reliability of key services and keep passengers connected across our most popular routes, we have made some amends to bus services in Bedford.

“We have worked in partnership with the local authority to deliver the best services we can during the pandemic, and our latest timetables have been introduced following discussions with Bedford Borough Council as part of our enhanced partnership agreement.

“The pandemic has accelerated changes in people’s travel patterns. Passenger levels remain significantly lower than pre-Covid meaning fares do not cover the costs of running services without government funding. Passenger numbers, even before the work from home advice, were low in Bedford, with service 9 operating at 56 per cent of pre-Covid passenger levels.

“Our current timetables are designed to reflect these factors, as well as trying to give certainty to customers at a time when the bus sector as a whole is facing challenges around driver availability due to the pandemic and factors in the wider economy. We are currently facing a staff sickness level of 11% at Bedford.

“We have to concentrate our resources on providing services which meet the needs of our customers and all service reductions have been implemented in response to passenger data analysis. It is in no one’s interest to operate empty buses on routes which do not meet the actual travel needs of Bedford residents.

“The number 9 bus at Shortstown into Bedford will no longer run at 7.31am or 8.01am, but will continue to depart at 6.31am and 7.01am, as our data shows these to be the key services passengers use to commute. Following passenger feedback, we will look to try and allocate double deckers at these times to accommodate more passengers.

“In addition, we are currently updating the roadside timetable case information and hope to complete this as soon as possible to make journey planning as easy as possible for passengers.