Bedford BID have been accused of attempting to take credit for next week’s #FiverFest by not making it clear who the organisers are on their social media posts about the event.

Fiver Fest is a national celebration of small businesses and shops who make a huge contribution to the economy of the UK and the wellbeing of our towns.

Businesses taking part have created one-off £5 offers of their products or services to help introduce them to new customers, and reward their loyal ones.

Bedford’s Fiver Fest has been organised by the Town Centre Champions – Bedford (TCC-B), a team of volunteers who have a passion for the town and want to help promote all it has to offer.

Bedford BID have shown their apparent support for the event by posting about Fiver Fest over 40 times in the last few days.

But, TCC-B complain they appear to have simply copy and pasted Fiver Fest posts, instead of sharing the originals, and failed to tag in the organisers, making it unclear who is behind the event.

An earlier post didn’t even link to the organiser’s website and TCC-B say this gave the impression that the Love Bedford Facebook page was the only place to get information about the event, say TCC-B

When they did mention the website, this was often behind the ‘see more’ button in the post, meaning anyone taking a quick look wouldn’t be able to see that it was organised by someone else.

“A significant number of businesses we have spoken to have asked if we’re connected to Bedford BID, which we are not. Many have said that is the very reason they are signing up.

“Aside from it being disingenuous, for them to post in this way gives the impression that they have put in all the hard work and goes against what we have told those businesses.

“It is also muddying the waters as Fiver Fest is spread beyond the Bedford BID boundary and includes businesses outside their patch too.”

And Helen is keen to point this may also mean people don’t get the right information.

“The businesses are adding to their £5 offers all the time,” she adds. “If Bedford BID had shared the original posts the update would happen on their page automatically.

“By copying and pasting our original content, anyone searching their page may now find incorrect information.”

In an email sent to Christina Rowe, Director of Operations at Bedford BID, and seen by the Bedford Independent, Helen has now asked for the posts to be removed.

In the email Helen says: “I have been inundated with people either a) asking me if I’m part of [Bedford] BID after all, despite me assuring them that I wasn’t or b) unhappy that my posts have been copied rather than shared which suggests your content is original when it is actually copied from another FB page.”

She continues: “By copying and pasting my posts, you could be seen to a) claiming credit for the effort required in putting something like this together and b) muddying the waters which could lead to businesses questioning my credibility when I made it crystal clear I was not linked with BID.”

However, Christina Rowe at Bedford BID believes they have done enough. She told us: “The Love Bedford platform was used to broadcast and support Bedford town centre BID businesses. This is not a BID event.

“The decision was made to share each business within the BID zone individually by their home Facebook page with a view to raising their profile and maximise exposure for the town centre.

“There was also a clear option to go to the website for all the details of the list. Bedford BID has clearly stated that this is it a community event taking on a national initiative.” 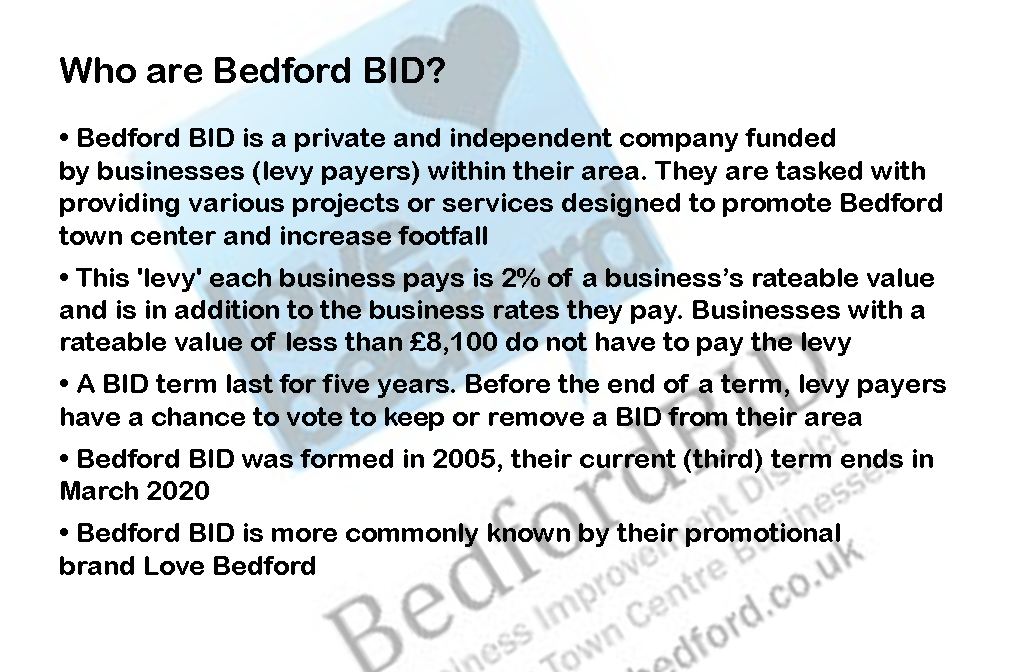