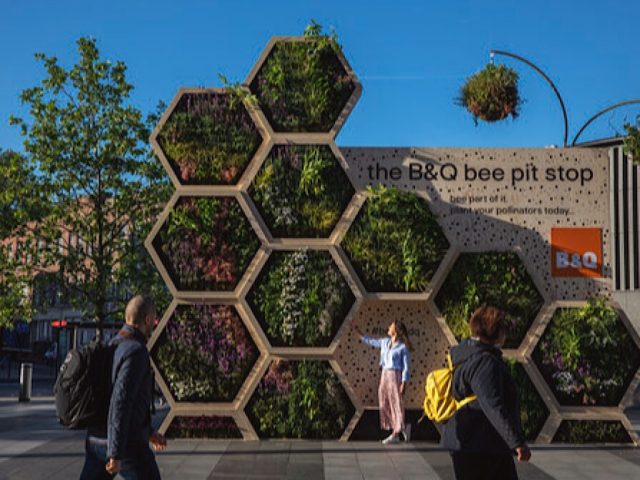 A Bedford-based business has helped create a huge ‘bee pit stop’ that was unveiled outside King’s Cross station on Monday (13 May).

The giant structure is adorned with thousands of pollinating flowers and is part of a campaign by B&Q to raise awareness of the steep decline in the UK’s bee-friendly habitats.

The panels were designed by RHS award-winning garden designer Matt Childs and created by Tapestry Vertical Gardens, a gardening company based in Bedford and Devon and were planted at their nursery in Stevington.

Describing the process, Tapestry’s Alan Cooley said, “We used lavender, osteospurnum, geranium, fatsia, foxgloves, lupins and fushias. The hexagonal walls were constructed at our nursery here in Stevington and then installed in London.

“The panels are made using thousands of plants and they’re all bee-friendly.

“We were delighted to get involved in this project and it has been great to have the chance to work with Matt Childs for the first time.

“The bee campaign is obviously important and it was a superb opportunity for us to highlight how fantastic a vertical garden looks in one of the world’s busiest urban spaces and the environmental benefits that urban greening brings to our cities.”

The King’s Cross billboard is the first of many bee pit stops to be unveiled around the country, with pollinating roundabouts springing up throughout the UK from June.

Whether it’s a whole pollinator flower bed, or just a pot of lavender on a balcony, a bee pit stop is a safe space for bees to rest and refuel, which Brits can easily create in their own outdoor space.

If you’d like to attract bees to your own garden or balcony, Alan’s advice is simple: “Just plant loads of flowering plants! Purple is a top colour but they aren’t that fussy.”

Alan’s colleague, Adam Shepard of Tapestry, was recently dubbed ‘the king of green walls’ by the Evening Standard. With urban garden space at a premium, vertical gardens are becoming increasingly popular. It’s not just the bees that love them…