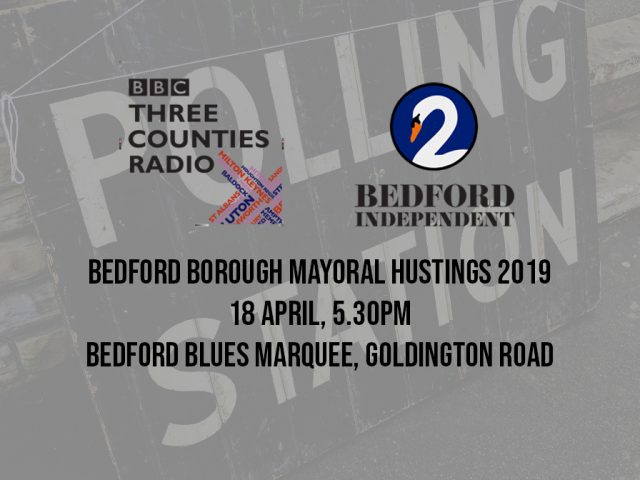 BBC Three Counties Radio and the Bedford Independent have partnered to host a hustings event for the 2019 Bedford Borough mayoral elections on 18 April.

In what’s expected to be a lively event, the hustings will see mayoral candidates grilled on the issues facing Bedford Borough today, such as knife crime, housing, homelessness, transport, education and health.

Hosted by Three Counties’ drive time presenter, Roberto Perrone, the panel will include:

News Editor at BBC Three Counties Radio, Carol Abercrombie, said: “Live broadcast hustings are always entertaining and a great chance for local voters to put their questions to the politicians who are after their votes.

Managing Editor at the Bedford Independent, Paul Hutchinson, added: “These hustings are a chance for Bedfordians to grill the Borough’s mayoral candidates about what matters to them.

“You will hear directly from the mayoral candidates about their plans for the Borough and see how they respond to scrutiny, helping you decide if they’re up to the job or not.”

The event is free to attend but those wishing to come need to pre-register. To register to attend please email 3cr@bbc.co.uk.

The event will be held in the marquee at the Bedford Blues’ ground, Goldington Road on 18 April from 5:30pm and is due to finish at 7pm.

Bedfordians will go to the polls just two weeks later on 2 May to choose the Borough’s mayor and their Ward and Parish councillors.