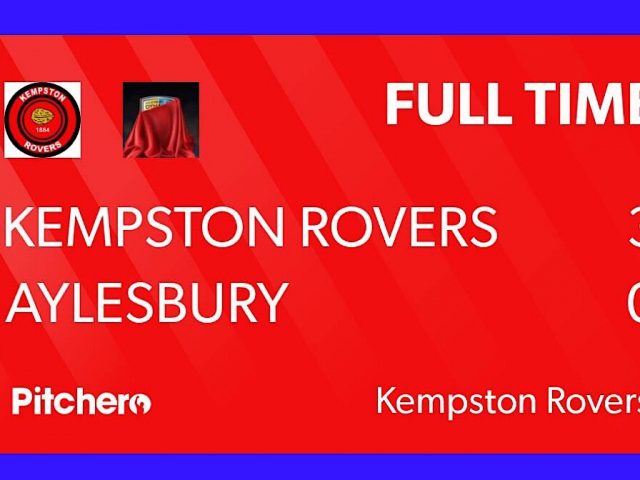 Kempston Rovers recorded back to back league wins and clean sheets in the sunshine at Hillgrounds, with captain Shane Bush staking a huge claim for the player of the season award.

Rovers came into this game looking to build on last weekend’s unlikely success against Bedford Town and were looking the more likely in front of goal, in spite of the visitors’ neat play in the middle of the park.

The first chance came after the quarter hour mark, when Daniel Akubuine clipped a cross to the back post which was met by Izale McLeod, but he couldn’t generate enough power to trouble Binnion.

Less than five minutes later, the deadlock was broken.  Shane Bush won the ball back deep in his own half and launched a hopeful ball forward to clear his lines.

It turned into the perfect pass for McLeod who nipped in ahead of Craig Carby to lift the ball deftly over the advancing Binnion and into the empty net beyond, his fifth goal in Rovers colours.

The remainder of the half was played at a seemingly pedestrian pace, only Akubuine with a stoppage time bustle into the box which saw him clip the outside of the post troubled either goal.

Three minutes after the break, Rovers were able to double their advantage. Ben Shepherd played a free kick from wide on the right into the box which was only half cleared by the Aylesbury defence.

Jordan Wright acrobatically turned the ball back toward goal with an overhead scissor kick that was glanced home by Shane Bush from the six yard line.

With the scent of goals in his nostrils, Scott Joseph attempted to add himself to the score sheet, but couldn’t find the target with two efforts in swift succession, first firing over after a neat pull back by Akubuine, before firing wildly wide when put through in the channel.

Midway through the half, Kempston made the game safe.  A long bouncing ball saw Bush competing with Odusoga as the pair ran to the edge of the Aylesbury box.

The Rovers man winning the dual and getting enough of a toe to the ball to steer it goalward.

Binnion, advancing from his line got a hand to it, enough to slow the ball down but as he scrambled back to his line, he couldn’t reach the ball before it trickled over the line.

The anguish on his, and his team-mates’, faces was clear to see as The Moles appeared a beaten side.

With ten minutes to go, Bush was denied a hat-trick by a flying Binnion save, having been set up by sub Josh Crawley.

Deep into stoppage time, Aylesbury had three chances in rapid succession but Deacon, Brito and Feyi were all denied by manful blocks as Rovers defenders threw themselves on the line.

Josh Crawley had one final chance for Kempston, but his lobbed effort drifted wide after he had won the tussle with Gilbert.

Rovers remain in fourteenth place in the table, but crucially move nine points clear of the dreaded dotted line with just six games left to play.

Aylesbury, thanks to Kidlington’s win today, drop into the bottom two – although they have already accepted relegation at the end of the season due to off field reasons.

Rovers will be looking to make it three wins in a row next weekend as they travel to out-of-form Welwyn Garden City.