A planning application to move the Bedford Islāmic Centre less than 200 metres along Midland Road has led to an unsigned leaflet being sent to nearby residents to urge them to oppose the application.

The Bedford Islāmic Centre wants to move from its current location in Priory Street to 125-127 Midland Road, the site of the former Irish Club and most recently a Greek taverna. It would then become a place of worship with a community centre and shop.

“A place where people can meet and chat, it is not a new thing, it is exactly what we have at the current site, which we would close.

“The proposed site will also be more accessible.”

The leaflet said if approved, the size of the centre could accommodate at least 400 worshippers, especially during Friday prayers, evening classes and at Ramadan. 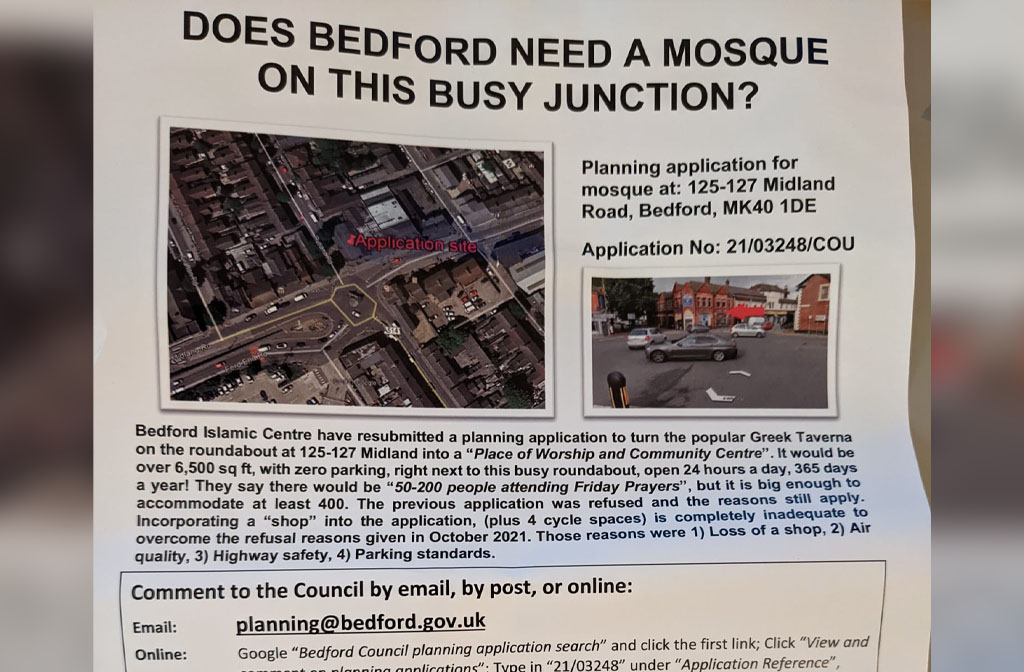 The Centre’s spokesperson said: “We pray five times a day and it only takes five to ten minutes. And it is quiet, you won’t hear anyone making any noise.

“The maximum people for those prayers is about ten people. Friday prayers, yes, this place is full. But our current centre doesn’t take more than 180 people, if you really squeeze them in.

“They say that we will have four hundred people, from where? We only have 200 members.”

The leaflet also claims that the lack of parking at the former taverna would be be “unfair” to the centre’s neighbours as cars would park in the nearby terraced streets. It also warns of loud conversations, car doors slamming and engine noises late at night and early in the morning.

The Centre’s spokesperson explained: “Most of us work in town anyway, people come by bike or by walking.

“For those that choose to drive, there is public parking nearby, but there aren’t that many anyway.

“I find it amusing, because before the site was a pub, it was a nightclub, it was a restaurant. Why were there no issues with people complaining about noise.

“But as soon as they hear that it is mosque…

“It is not a mosque, it is a community centre, the part of worship is a very minute part of it,” he added.

A similar application made by the Centre (without the shop) was rejected by the council in October last year.

Reasons for refusal included the loss of an essential local shop, additional noise and disturbance, and on-street parking contrary to council policies.

Also, that the applicant did not provide sufficient information to enable an accurate assessment of highway safety, traffic impact and parking implications caused by the development.