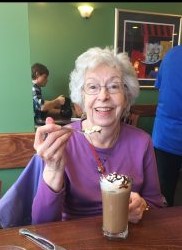 She was born April 2, 1934 in Kempston, Bedfordshire the third child of Walter Noah Slater, who drove a freight train on the London and North Eastern Railway, and Lottie M. Slater (nee Curtis).

She had strong memories of the German bombing raids early in World War II and the V1 and V2 rocket attacks at the end of the war, both of which destroyed parts of her neighbourhood. “Despite the war,” she wrote, “I had a happy childhood.” She remembered that on wash days, Mondays, her mother gave her the privilege of turning the mangle while wet clothes ran through the wringer.

In 6th grade she was awarded a leatherbound Bible for memorizing the 1st, 15th, 25th, 37th, 101st, 113th, and 145th Psalms. At age ten she volunteered as a nurse’s aide and learned to change sheets and care for wounded soldiers.

In the summer of 1954 she visited her uncle, Robert Curtis, who lived in Detroit. It was her first visit to the United States, and she was not impressed, but on the way home aboard the Cunard liner, HMS Queen Mary, she met a young professor at Notre Dame University, James L. Cullather. After a two-year courtship, conducted mainly through letters, she sailed again on March 21, 1956, and they were wed in the log chapel at Notre Dame on April 2.

She raised six children in a home that she made comfortable on Diamond Avenue. After they were grown she cared for her husband during a long convalescence. She loved to travel, and in her seventies visited Italy, Canada, Colorado, Massachusetts, and Washington, DC. She taught herself to play the piano, and she enjoyed reading, crossword puzzles, gardening, and watching tennis and cycling, especially the Tour de France, on television.

She was a member of Holy Cross Catholic Parish for 55 years, and during the pandemic she sorely missed the friends she met weekly at mass.

She was preceded in death by two brothers, Derek and Robert Slater of Bedford, and by her husband James. She is survived by her six children and their spouses–Christopher and Mary Cullather of Beaumont, Texas; Michael Cullather, of Mishawaka, Indiana; Nick and Melanie Cullather of Bloomington, Indiana; Jane and Jerome Jump of Gaithersburg, Maryland; Sarah and David Nanos of Indianapolis, Indiana; and Richard Cullather of Greenbelt, Maryland–as well as four grandchildren, Katie Quinn, Angela Jump, Isabel Cullather and Joseph Cullather.