This translates to just under one-third of the Borough’s population. 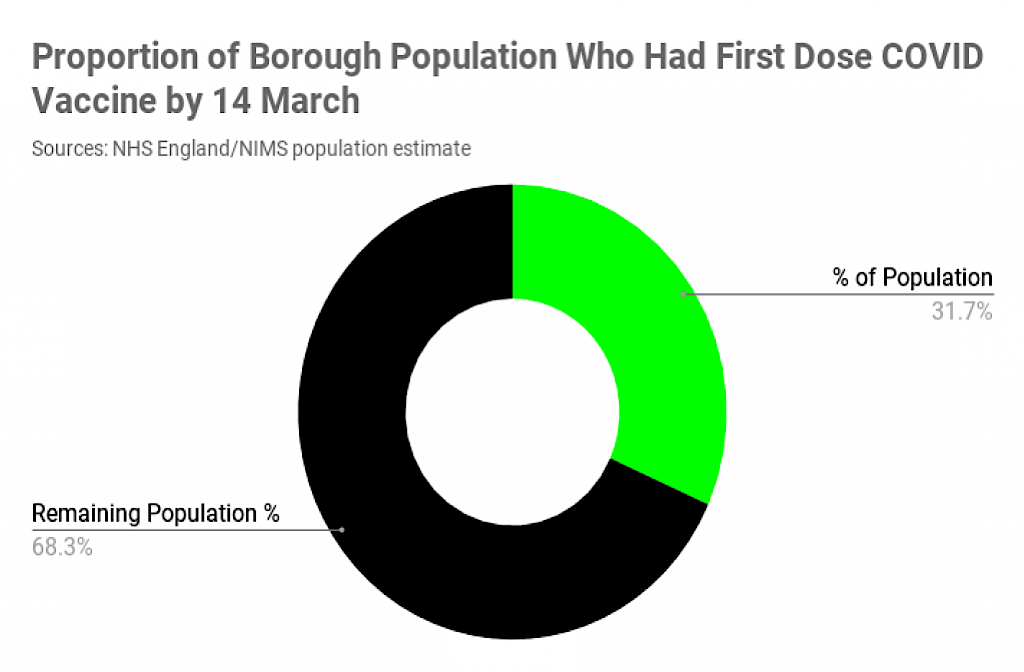 Labour Councillor Louise Jackson, portfolio holder for Health and Wellbeing said: “The vaccination programme in Bedford is making excellent progress and the majority of our most vulnerable residents have already been vaccinated.”

More than 16% of the borough’s under 60 population had also already received their first vaccine dose by 14 March.

“The number of vaccinations in Bedford Borough, across the various age cohorts, broadly match the national picture, with all groups over the age of 70 showing in excess of 92% take-up.

“Those in the 65-69 cohort are fast catching up and currently at 87.6%. These numbers are very encouraging and I would expect them to keep increasing as we move through the different age brackets.

“Vaccine hesitancy appears to be very low, though it is important that health authorities continue to reach out to those who are hesitating, and encourage them to get vaccinated.”

Cllr Coombes mentioned that as a member of the 50-54 age cohort, who are now being urged to come forward for their vaccines, his first dose was booked this week.

He encouraged all to get vaccinated ‘to protect themselves, their friends and families, and our NHS’, adding that getting vaccinated will help ‘avoid more frustrating lockdowns’.

Cllr Jackson will also book her own appointment when ‘offered the opportunity and urged ‘everyone else to do the same.’

She concluded with a message for anyone in the first priority groups yet to receive a jab:

“It’s not too late if you missed an earlier invitation either – the teams are still vaccinating people in the groups that were rolled out earlier, so if you come forward now, you’ll be offered an appointment as soon as possible – get in touch with your GP, call 119 or visit the NHS website here.”

NHS England publishes weekly local vaccination numbers and since 25 February has published a cumulative count of the number of first dose vaccinations in the Borough.

The latest figures by age group are: 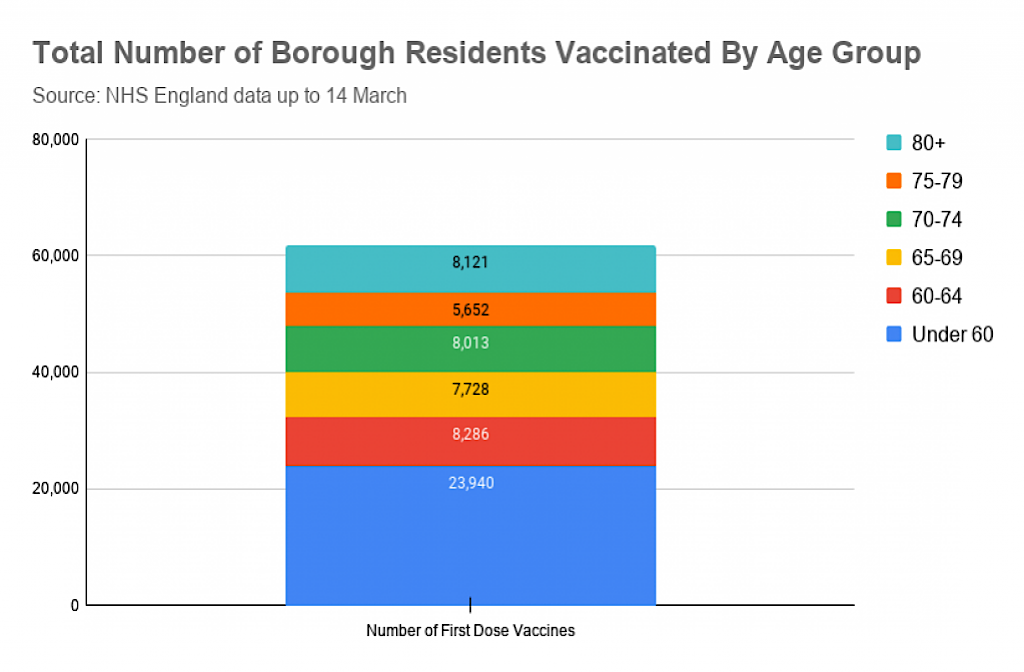 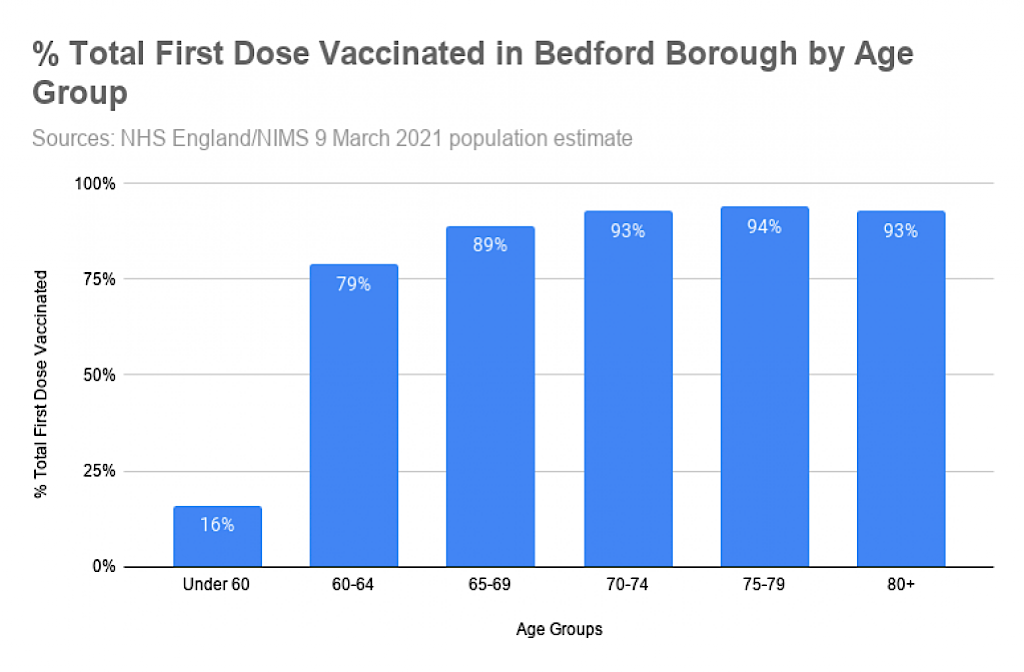 The rate for social care staff in other settings, including non-registered providers and local authority employed, was 78%.

Here there is considerable variation in the proportion of the population within the Borough who had already received a vaccine by 14 March. 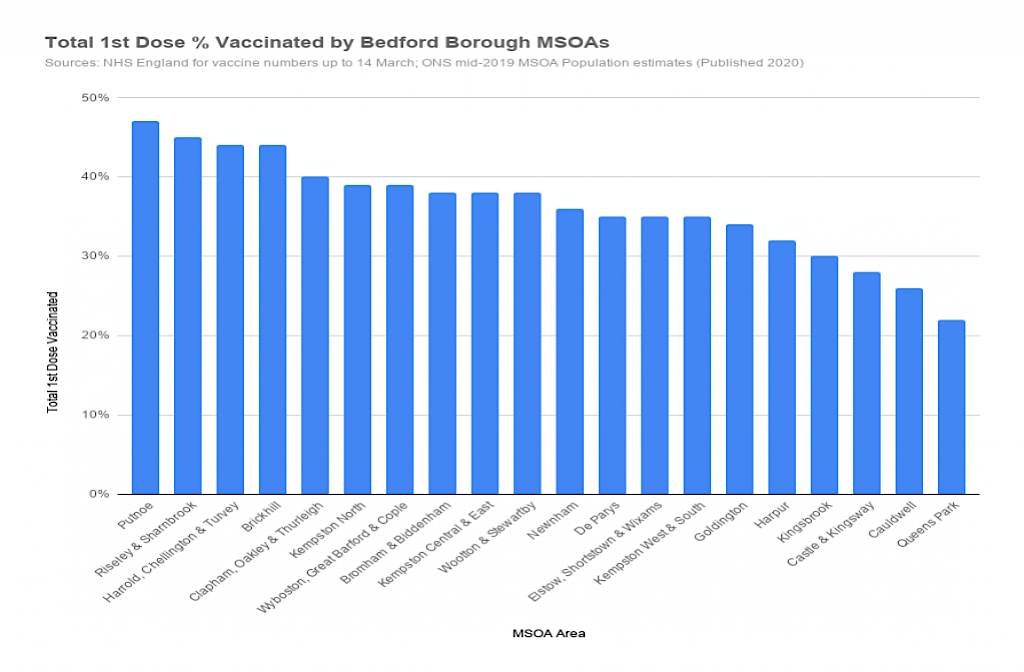 The differing MSOA vaccination rates were noted as a possible cause for concern at the council’s local outbreak meeting on 11 March.

Age group differences by MSOA certainly play a part in the different rates. The four MSOA areas with the lowest proportion of their populations who had received a first vaccine dose were Kingsbrook, Castle & Kingsway, Cauldwell, and Queens Park.

These are an exact match for the highest proportions of the population under 60 in the ONS MSOA population estimates for mid-2019.

Currently, there’s no available figure for the number of borough residents who have had their second vaccine doses.

As more people near the endpoint of the 12 week period after their first vaccinations in which to get their second doses, this number will rise significantly.

Finally, as vaccine numbers have increased and the latest lockdown measures have taken effect, COVID infection numbers continue to fall significantly from their all-time peak at the year’s start. 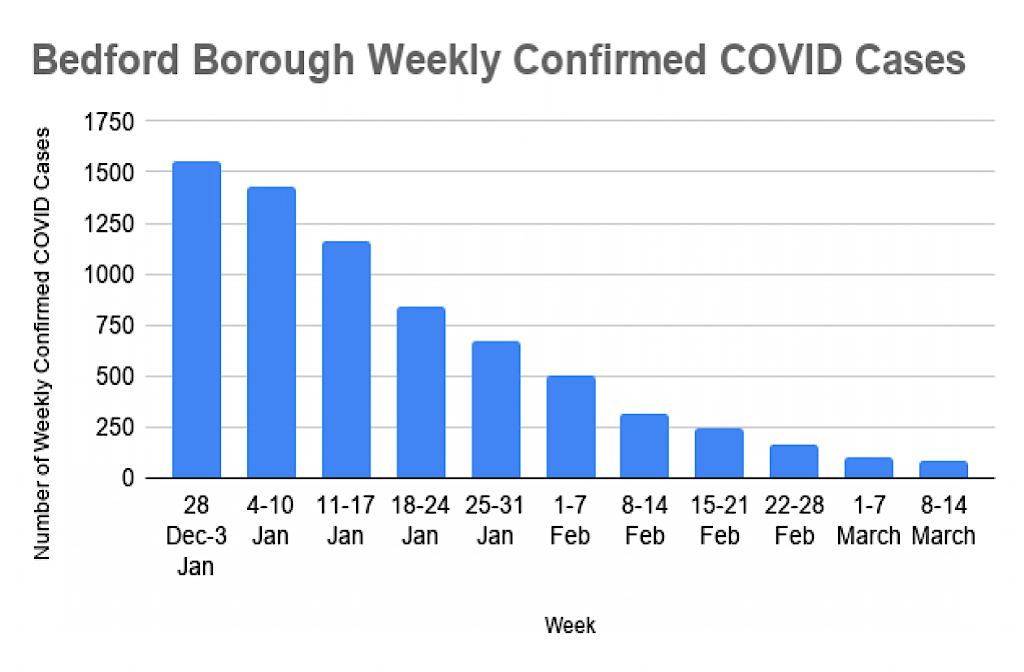 Where are people getting their vaccines?

Not all vaccinated Borough residents have received their first doses in the Borough. An appeal for info in several Bedford Facebook community groups confirmed reasons for this varied.

Some went outside of the Borough for personal reasons, others because of traffic convenience and a few even to enjoy the opportunity to travel a little beyond the Borough area.

Some also chose to travel beyond the Borough as the three Bedford vaccine centres had not come up online as available or offering a slot as quickly as elsewhere.

Popular locations outside of the Borough included Stevenage, St Neots and Biggleswade.

People unable to book a slot at a suitable vaccine centre or community pharmacy, are advised to wait for their GP to contact them. They can then book the vaccine at their local GP vaccine service.

An NHS Bedfordshire, Luton and Milton Keynes Clinical Commissioning Group (CCG) spokesperson said: “As this is a rollout of a vaccination programme, some large vaccination centres were available to book ahead of the local sites coming online.

“The public had the choice to use these large vaccination sites or wait for their local sites to open as the rollout continued.”

The spokesperson confirmed the regulator-approved Astra-Zeneca and Pfizer vaccines were being offered ‘across vaccination centres’ in the region.

All three Bedford vaccine centres were up and running by February.

Wherever Borough residents had received their COVID vaccines, there was universal praise for the ‘great service’ of the vaccine centres themselves.

This feedback Cllr Coombes had also picked up on: “Everyone I have spoken to about getting vaccinated sings the praises of those administering the vaccine and the efficiency of the process at the centres”.