Mike Rayer has made five changes to the Bedford Blues as he gets the team ready for what he says will be an “interesting challenge” against Cornish Pirates at Goldington Road tomorrow afternoon (23 March).

Recognising that they’ve had some close losses in recent games, Rayer says they’ll be looking to continue the excitement at Goldington Road over the past few weeks, with a victory against the Pirates who they’ve already faced three times this season.

The Sky Sports cameras are also in town and fans are expecting a lot from the clash. The Blues currently hold two wins over the visitors with a league victory away and a cup win at home.

Bedford currently sit in fourth place in the table just three points ahead of the visitors, but will be looking to extend that lead and reel in third placed Jersey Reds.

But the Pirates don’t give up easily and will be a tough challenge, as proven in November with their 22-20 win in Penzance.

Blues coach Alex Rae added: “Having played the Pirates three times already we should know a fair bit about each other, however all those games have actually thrown up different challenges.

“We’ve had two weeks prep for this game and the boys are looking forward to getting out there and implementing all areas we’ve been working on.

“Nearly all our games this year have been close and exciting and we’re not expecting anything else on Saturday.”

But are the recent contract negotiations affecting what happens on the pitch? Rayer doesn’t think so: “The lads are pretty resilient and there is a realisation that this time of year is a tough time of year for everybody concerned… We’re pleased with what we’ve retained so far and the new additions.

“There are a few boys moving on and we want to finish the season in style and give them some memories to go away with in what will be their last season in Bedford.” 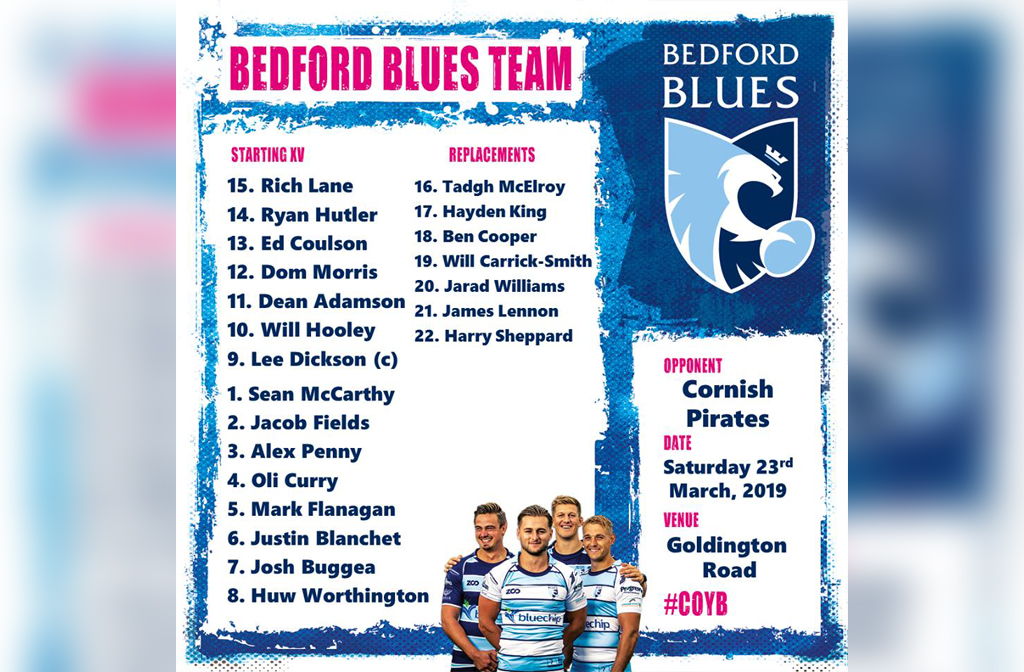 Three changes to the backs this weekend: Ryan Hutler, Dom Morris and Will Hooley all returning to the starting line-up. Oli Curry moves to the second row and Huw Worthington reverts to number eight. Justin Blanchet and Josh Buggea both starting on the flanks.